In 2013, I worked on a shellfish boat in New Zealand.  We used hydraulic systems to lift lines of shellfish out of the water, conveyor belts to sort them, and packaged mussels by the thousands in giant, half ton sacks.  A far cry from the low-tech nighttime dredging from a longtail boat I saw in Thailand.

With this technological edge, surely New Zealand shellfish farmers are less vulnerable to ocean acidification than those in regions like Southeast Asia.

The oyster farmers I lived and worked with on Stewart Island told me how the oysters they grew hadn’t reproduced properly in two years.  Was this caused by ocean acidification?  There was no way to know really, because nobody was monitoring the chemistry of the local waters, and nobody had studied how this species might respond to ocean acidification.

I spoke with one of the pioneers of the green-lipped mussel farming industry in the Marlborough Sounds.  “Have people here been talking about ocean acidification?” I asked him. “No, not at all, not at all.”

That’s the conclusion I came to.  And, I’m happy to say, New Zealand has come to that conclusion, too.  In December 2013, the United States Department of State, in collaboration with Global Ocean Health, the Marine Conservation Institute, the New Zealand Ministry of Primary Industries and other partners, sponsored a workshop called “Future proofing New Zealand’s shellfish aquaculture: monitoring and adaptation to ocean acidification.”

The workshop brought experts from the frontlines of the oyster crisis in the Pacific Northwest to New Zealand.  For the first time, scientists and industry members were in the same room, talking about ocean acidification together.

So what’s the key here?  What was the turning point? It’s simple, really.  It was bringing industry, science and policy together, and uniting them with a common goal: to understand how communities and industries might be affected by ocean acidification, and to do something about it.  It happened in New Zealand and Washington, it’s happening in Maine and Maryland, and it needs to be happening everywhere. 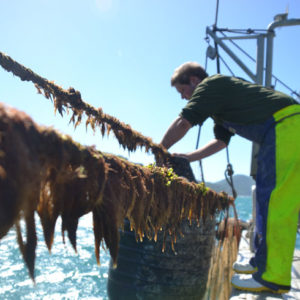