Update: Investigating Dolphin Deaths in the Gulf of Mexico

Over the past five years, unusually high numbers of dolphins have been dying in the Gulf of Mexico. The National Marine Fisheries Service declared an unusual mortality event back in December 2010. While it’s easy to assume that the BP Deepwater Horizon oil disaster is to blame for these sick and dying dolphins, it’s important to have the scientific evidence to hold BP accountable.

Last week a group of 16 scientists published a paper with detailed information when and where dolphins are dying across the five Gulf states. Since first reading this paper last week, I’ve been thinking about what it means that the clusters of dolphins with the highest and longest mortality rates were those in Barataria Bay following the oil disaster, and also those where oil landed in Mississippi and Alabama in 2011. The authors of the study don’t hesitate to make inferences about the connection to the oil disaster, and so neither should we.

BP has repeatedly stated that the disaster didn’t adversely impact dolphins, but we know that oil negatively affects marine mammals and that the highest incidents of strandings were in oiled areas. Sure, it’s possible that other factors may have harmed these dolphins, such as changes in water temperature and salinity. It’s also possible that some of these dolphins may have suffered from infections, but overall, this area was heavily impacted by the BP oil disaster, and it’s also possible and probably more likely that the BP oil disaster tipped the scales for many of these dolphins, making them more vulnerable to other stressors (like cold water or infections).

Throughout their paper, the authors stress the importance of more detailed research to determine the exact causes of death in each of these clusters. This highlights the importance of sustained and long-term data collection. Without historic data we wouldn’t have the context needed to understand the significance or determine the causes of the dolphin deaths in the Gulf. 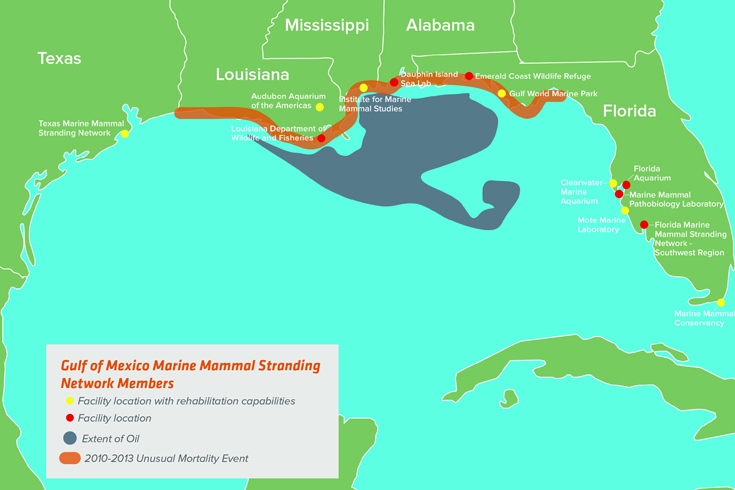 Marine mammal stranding networks are vital to understanding the health of dolphins in the Gulf. These experts act as first responders when a dolphin is found stranded on a beach or in shallow water, but budget cuts limit the capacity of these stranding networks to respond. Restoration dollars, provided by the penalties paid by BP and other responsible parties, can help these stranding networks save the lives of stranded dolphins. The future of our understanding of this unprecedented event depends on our commitment to gathering the data we need to make marine restoration a reality in the Gulf of Mexico.