Ocean Conservancy is bringing Danielle Dixson, an expert on coral reef fishes, to Capitol Hill to speak to congressional staffers about ocean acidification. She will be participating in a panel hosted by Ocean Conservancy in partnership with Senator Mazie Hirono (D-HI) and Representative Mark Takai (D-HI), along with the Ocean Caucus. She recently took some time to speak with us about her work at the University of Delaware.

OC: You’re a self-proclaimed “fish-nerd” and a tireless advocate for ocean health, what drives your passion?

DD:  The ocean is important for numerous reasons; climate regulation, a protein supply for millions of people, and storm protection for coastal communities. The ocean is also beautiful and people love enjoying the beach to unwind. However, because humans do not live underwater, we often overlook the damage inflicted on the ocean. Coral reefs are the ocean equivalent to ecologically important rainforests and their degradation is happening at an alarming rate. I work to raise public awareness about consequences of our behaviors on the ocean because I believe that only understanding stimulates change. 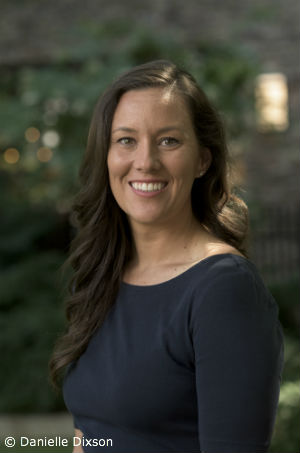 OC: If a stranger stopped you on the street and asked you what you do as a career, how would you explain it to them?

DD:  At the University of Delaware I wear many hats. As a professor I teach marine science courses, and advise students conducting independent research. As a marine ecologist, I study global problems affecting our ocean and share my findings through scientific publications and conference presentations. I also engage the general public through forums such as DVDs and public speaking that are accessible to a range of ages and backgrounds. This helps my projects run smoothly by educating those reliant on the marine environment, as well as being personally fulfilling.

OC: What’s the research you are currently working on?

DD: Broadly, I study how marine animals use sensory information to make important decisions and how their choices impact conservation and management in a changing ecosystem. I’m particularly interested in the coastal environment, since human interaction there is high. Currently my work includes understanding how human-induced changes will affect the behavior of marine organisms. I also am studying how alterations to the terrestrial shoreline will affect aquatic communities, and what affect multiple stressors will have when experienced simultaneously.

OC: Why is it important for ordinary citizens to understand how ocean chemistry affects fishes’ sensory cues?

DD:  Any environmental change that affects behavioral interactions can have huge ramifications at an ecosystem level. Ocean acidification is directly linked to carbon dioxide (CO2) emissions from humans, but that means humans can make decisions to reduce their individual footprints. Carpooling, eating sustainable and locally-sourced food and recycling all impact CO2 emissions that enter the atmosphere. Understanding ALL these ramifications will help people adjust their behavior for the global good.

OC: You’ll be speaking with congressional staffers in Washington D.C. on ocean acidification’s impacts on fish behavior. What are the key points you will address?

DD:  Scientists first thought ocean acidification was beneficial because the ocean absorbed excess CO2 from the atmosphere. Without this the earth would be a much warmer place. Scientists now know this is causing water pH to drop, and the ocean to become more acidic. While we understand the chemistry, we do not understand the consequences for organisms living in this rapidly changing environment. Research in my lab demonstrates that while fishes can survive in water with pH levels projected in the near future, they exhibit behavioral and cognitive abnormalities including the inability to perceive and respond appropriately to sensory stimuli. A clownfish under current ambient water conditions (400 pCO2) can use smell to avoid a predator. However, clownfish raised in future pH levels (1000 pCO2) prefer the predator cue instead of avoiding it. These changes have been shown in other species, like the Temperate shark and several small damselfish, and with other sensory stimuli, including hearing, the ability to learn and general behavior.

We are excited to have Danielle speaking on behalf of Ocean Conservancy on such an important issue, and look forward to seeing her on Capitol Hill!