Ten years ago, I was finishing graduate school. I was becoming an expert on how carbon dioxide is stored in the world’s oceans, but – and this seems weird to me now – I hadn’t heard about ocean acidification. Hardly anyone had. Only a handful of scientists had started to realize that as the ocean sops up carbon dioxide from the atmosphere, ocean chemistry changes in ways that can hurt fish, shellfish, and corals.

Just five years later, concern about ocean acidification had grown dramatically, and thousands of people were involved. West Coast shellfish growers were trying to save their hatcheries from the effects of ocean acidification, while scientists were scrambling to offer information and solutions. Ocean Conservancy began working on this issue in 2012, helping bring affected business people, policy makers, and scientists together during the initial search for solutions in Washington State, whose shellfish hatcheries experienced dramatic die-offs of their oyster larvae.

Even though ocean acidification is a very young issue, the West Coast has been a consistent leader in the search for solutions. Today, the West Coast Ocean Acidification and Hypoxia Science Panel, a group of scientists from research universities spanning the entire coast convened by California Ocean Science Trust, has just released a synthesis of the current state of scientific knowledge about ocean acidification and hypoxia in California, Oregon, Washington, and British Columbia and what management options might be used to address these issues there.

Their findings boil down to two main themes: 1) We need to reduce exposure of marine species and ecosystems, particularly by decreasing carbon and nitrogen pollution and investigating strategies to remove carbon dioxide from the water; and, 2) we also need to improve the ability of marine life to cope with changes by reducing other stresses, like warming ocean temperatures, and improving animals’ own capacity to adapt. 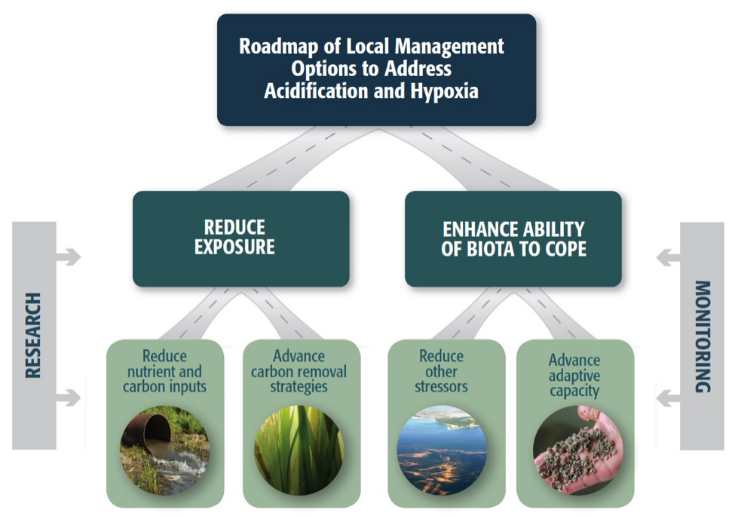 There’s a good amount of research still to be done before their findings can be put into action, though.  The panel agrees that we need to understand where local pollutants will worsen ocean acidification and hypoxia, and that we need to develop robust predictive models to forecast hotspots. We also need to find ways to reduce pollutant inputs while also rewarding local government agencies and businesses that do so, and we need water quality goals that incorporate ocean acidification. We need pilot projects to determine whether and where carbon dioxide removal could help, and whether ocean conservation or restoration can guard against damage from ocean acidification and hypoxia. We need to develop and refine resource management rules that take ocean acidification into account. We need to understand the pros and cons of selective breeding or aquaculture to improve species’ ability to adapt.

To that end, the Panel makes several research recommendations to fill the knowledge gaps that currently stand between the science and managing with ocean acidification in mind. They underscore the need for research partnerships and coordinated monitoring, which will all make the most of the historical strong collaboration on the West Coast on ocean acidification and hypoxia.

This report is the next big step towards taking care of our local ocean life in the face of large-scale environmental changes that threaten it. And doing that right will also take care of the people and businesses that depend on a healthy ocean.