In the past four decades, we’ve made meaningful progress toward ending overfishing in U.S. waters and rebuilding fish populations. And we have a little-known law with a long name to thank: the Magnuson-Stevens Fishery Conservation and Management Act (MSA).

To celebrate the 40th anniversary of the MSA, we’re sharing fishery success stories to remind us that the MSA is a keeper. Here are three species that have all benefitted from MSA regulations in the Atlantic (and don’t forget to read our other success stories from the Gulf!).

Black sea bass’ mild, white fillet makes it a dinnertime favorite, and therefore coveted by recreational and commercial fishermen alike. They’re also quite accessible compared to other fish species, allowing fishermen to catch them using both hook-and-line gear and black sea bass pots. Unfortunately, this popularity led the southern stock, which ranges from Cape Hatteras to the Florida Keys, to be declared overfished in 2005.

In 2006, managers instituted a rebuilding plan that reduced allowable harvest and instituted size and bag limits. The rebuilding process wasn’t easy—new regulations meant economic impacts for commercial fishermen and operators in the region. But thankfully, their efforts paid off. The population was officially declared rebuilt in 2013, and black sea bass continues to be a culturally and economically important fish in the South Atlantic. 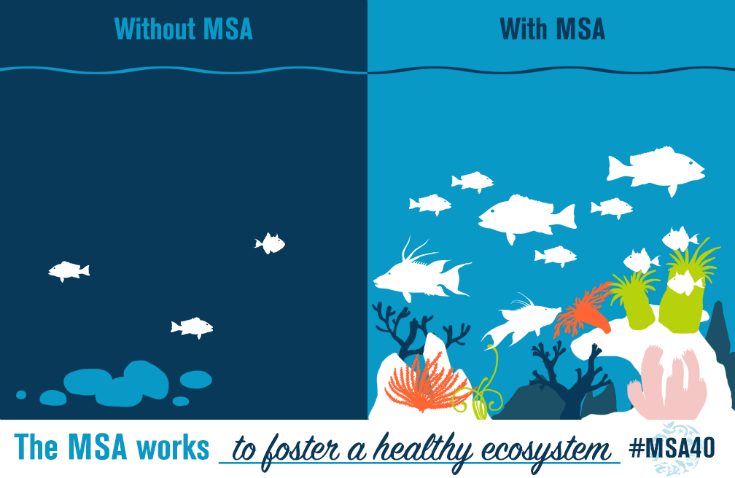 Stretching from the Maine to the balmy waters of Florida, bluefish are a migratory species that move north during the warm spring and summer months. Bluefish are fast and opportunistic predators, known for a peculiar feeding strategy called the “bluefish blitz”, where large schools of bluefish attack bait towards the surface.

Bluefish are a favorite in the recreational sector—recreational fishermen account for 70% of the total catch in the last 20 years. Caught using hook-and-line gear, gillnets and occasionally trawls, bluefish are delicious to eat and are often marketed fresh or smoked. A significant increase in fishing effort led managers to implement a rebuilding plan in 1990, and it was officially declared rebuilt in 2009.

Scallops may not technically be fish, but they’re still one of the most valuable fisheries in the United States. These invertebrates are primarily found from the Mid-Atlantic north to Canada on sandy or gravel bottoms, and are a favorite of seafood lovers around the world.

Major year-to-year fluctuations in stock caused managers to implement a management plan in 1982, involving effort reductions, area closures and gear restrictions. In the years following new area closures established in 1998, commercial landings and revenue almost tripled. Now, the U.S. has the largest sea scallop fishery in the world, with 53.5 million pounds of meat worth $370 million harvested in 2008 alone. Just another shining example of how management under MSA is good for fisheries and for the economy!

Read more about fishery success stories in the Gulf and take action to protect the future of America’s fisheries!