Do you remember how excited we were in June when a revolutionary set of maps depicting where marine mammals, fish, and birds are distributed in New England was released? Well, let’s just say, we were pretty excited. You can only imagine our excitement when the Mid-Atlantic released a similar set of maps this month, characterizing the spatial and temporal distributions for over 100 species in the region.  This is a big deal.

Off the coast of the Mid-Atlantic lies a beautiful and complex ocean ecosystem, from shallow coastal bays to deep offshore canyons. This ecosystem is home to an array of species, many of which move in and out of the region at certain times of the year. In an effort to better understand how species are distributed throughout the region across space and time, a group of scientists undertook one of the largest known efforts to gather and synthesize species data. The draft products were just added to the Mid-Atlantic Ocean Data Portal, substantially increasing our knowledge base of marine life for ocean managers, stakeholder, and the public.  While they are draft versions and therefore still subject to review and changes, this is a huge step forward for our understanding of marine life in the region. 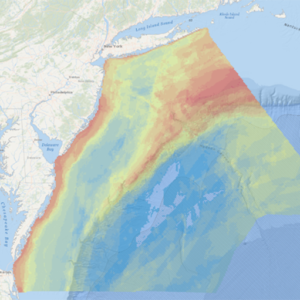 Interested in knowing marine mammals that are sensitive to high frequency sound are likely to be found? Want to know where endangered bird species are likely to be distributed? What about where the core biomass of forage fish is found? There is now a map for all of that.

Head on over to the Mid-Atlantic Ocean Data Portal to explore these data, and more!