A new climate change assessment in the Arctic was released last week, and it had good news and bad news. The report, compiled by the Arctic Council’s Arctic Monitoring and Assessment Program (AMAP), had contributions from almost 100 scientists and looked at the status of the Arctic from 2011 to early 2017.

The Arctic is warming faster than any other region on the planet—over the last 50 years, the Arctic has warmed at a rate more than twice the global average. And the situation is only getting worse: the report found that the Arctic was warmer from 2011 to 2015 than at any other time since recording because around 1900. These recent record-setting temperatures mean increasing melting of sea ice, glaciers, permafrost and snow, which results in the ecosystem become wetter and more variable. 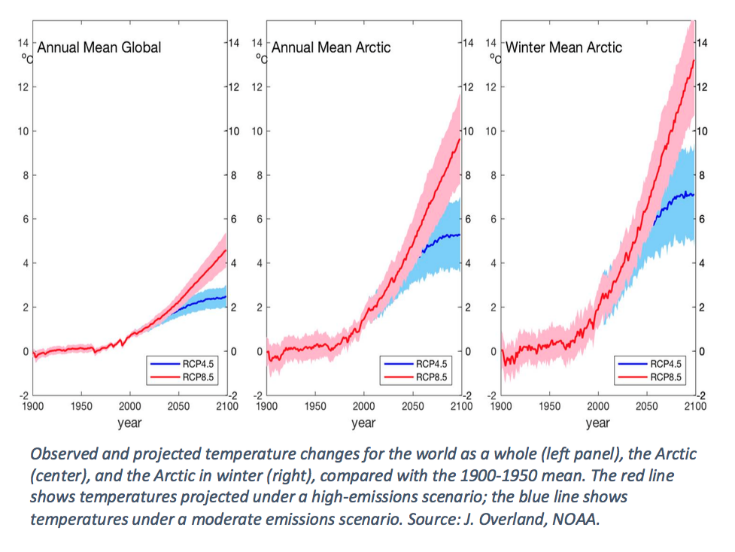 Overall, sea ice is shrinking, permafrost is thawing, air temperatures are warming and the Arctic Ocean is becoming warmer and less salty. This has massive implications for the people and wildlife that rely on Arctic ecosystems—already, communities are struggling with increased coastal erosion, higher risks of wildfires and floods and damages to infrastructure built on shifting permafrost. Reductions in sea ice will also open new shipping routes, which increases the risk of oil spills and ship strikes on wildlife.

I know, that sounds bleak. But now on to the good news.

We still have time to turn this around. The report found that by implementing the 2015 Paris Agreement, we can curb the damage to the Arctic throughout the century. Although it would take some time to see drastic results (the climate systems takes time to respond to changes), near-term cuts in greenhouse gas emissions can help stabilize temperatures in the Arctic by the middle of this century. AMAP reports that meeting the goals of the Paris Agreement would cut over 20 cm of sea level rise globally.

It is clear that the Arctic is undergoing significant—and damaging—changes due to climate change. This report confirms we have much work to do, but gives hope that there is still time to do it.

Here at Ocean Conservancy, we are dedicated to keeping the Arctic healthy and cool. You can join us: take action today to tell the Trump administration to not roll back protections in the Arctic.