The Beaufort Sea is home to unique marine wildlife

The Beaufort Sea is located in the Arctic Ocean, just north of Alaska and western Canada. Indigenous peoples have lived on the Beaufort coast for millennia. The waters of the Beaufort Sea are also home to unique marine wildlife, including ice-dependent seals.

We used a sophisticated ecosystem model to evaluate the impacts of four different hypothetical oil spills, including a near-shore spill of crude oil from a drilling platform and a tanker ship spilling crude oil near the U.S.-Canadian border. A major oil spill would spread out to affect a vast stretch of the Beaufort Sea and coastline. 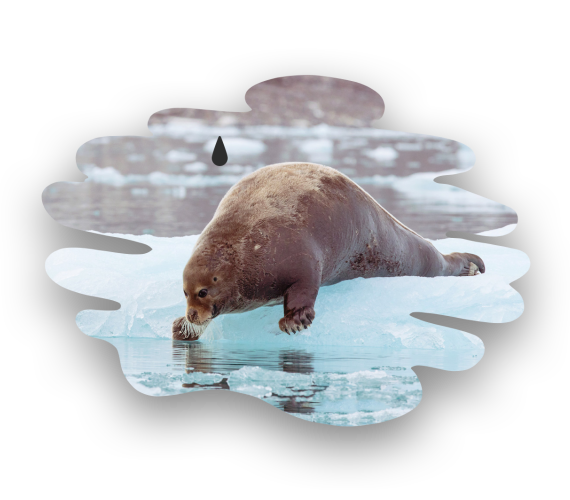 Oil contamination can injure or kill marine mammals, birds and fish—and would have serious impacts on indigenous people who rely on those species. Relative to species from lower latitudes, oil contamination may have more severe impacts on Arctic animals.

After simulated oil spills, the ecosystem model showed a decrease in seal populations in affected areas

Oil contamination affects the distribution of pinnipeds in different ways

For example, in a hypothetical scenario where oil spills from an oil platform off the Beaufort Sea coast, the ecosystem model predicts that in the months following the spill, areas east of the spill site will see local population increases as pinnipeds cluster in unaffected areas. However, affected areas west of the spill site will experience local declines in pinniped population.

In response to a hypothetical oil spill from a tanker near the U.S./Canadian maritime border, the ecosystem model predicts that pinniped catch in the community of Nuiqsut will decrease the year after the spill, then gradually recover as time goes on.

Join Ocean Conservancy and help us prevent this kind of oil spill from happening. Take action by telling the Secretary of the Interior not to open new areas of the ocean to risky offshore drilling.