By now, coastal communities are asking: “Who’ll be hit next by ocean acidification? And what can people do?” Until now, we haven’t known where exactly in the United States ocean acidification is most likely to affect marine ecosystems, and where the effects on people could be greatest. (Fortunately, several forward-thinking states are already studying the issue and recommending next steps!)

Three years ago, I teamed up with an economist, a human geographer, and another ocean acidification scientist to lead a study that would identify ocean acidification “hotspots” around the United States – places where ocean changes will be large and coastal communities depend heavily on shellfish harvests, but where people don’t have many resources to guard against losses of these harvests. We gathered a group of 20 science and policy experts to study the issue at the National Science Foundation-funded National Socio-Environmental Synthesis Center (SESYNC). Since then, we’ve synthesized information about the oceanography, shellfish harvests, and coastal communities across the United States in a formal risk assessment. We’ve just published our results in Nature Climate Change this week.

There were a couple results that really surprised us. Most amazing of all, we found that there is no single region in the United States that maxes out all the scales: no place has the greatest chance of ocean acidification, the greatest dependence on shellfish harvests, and the lowest amount of resources to fight it. While that’s good news, it does make the job of comparing hotspots across the country much harder.

Different shellfish-harvesting areas of the country face risk from ocean acidification from different mixtures of factors.

The Pacific Northwest, whose $272 million, 3,200 job Pacific oyster industry has already been endangered by ocean acidification, faces risk from multiple oceanographic factors like dissolving atmospheric carbon dioxide, upwelling, and nutrient pollution, and it also depends heavily on money and jobs from shellfish harvests. But the area is full of experts on ocean acidification, who have worked together with growers to fight it. The Northeast United States doesn’t have as many oceanographic risk factors, but it is home to many extremely valuable and historic shellfish industries. Think of New Bedford, Massachusetts’ sea scallop fishery, New England’s quahog and chowder clam harvests,  and Virginia and Maryland’s recently reborn Eastern oyster industry. These areas haven’t invested as heavily as the Pacific Northwest has to study the issue and develop defenses, even though a lot of money and jobs are at stake. The Gulf Coast also doesn’t have as many ocean risk factors, but certain counties and parishes, like Plaquemines, Terrebonne, and St. Bernard parishes in Louisiana, make a lot of money from oyster harvests. There are almost no efforts in the Gulf region to track acidification and take defensive action to protect local jobs and income.

Another shocking result was how little information exists about how our nation makes a living from the water. As this was a synthesis project, we limited ourselves to data that had already been collected rather than going door-to-door and doing our own surveys. While there are fantastic public databases concerning some aspects of marine harvests, there are some gigantic holes. For example, we don’t know which coastal towns could lose the most jobs if shellfish harvests decrease. But that’s powerful information that will help citizens plan for a changing ocean.

I’m glad that so many states are already studying what ocean acidification will mean for them. But our new study reminds us that planning ahead for acidification doesn’t just mean focusing on the water. We also need to think about people and harvests, too. Strengthening coastal communities or safeguarding shellfish harvests involves sharing knowledge within communities, and teaming up to research new ways to sustain marine populations. Some inventive solutions are already being tested: Pacific Northwest shellfish growers are “sweetening” water in their hatchery tanks with carbonate minerals, and they are thinking how to breed more resilient young shellfish. Communities are considering how to cut nutrient pollution that worsens ocean acidification while they work on long-term projects to cut carbon dioxide emissions too. Strategic investments in ocean acidification research that will prepare coastal communities for the future also need to include work on land, to gather key data about people and to strengthen their ties to each other to share ideas and solutions. 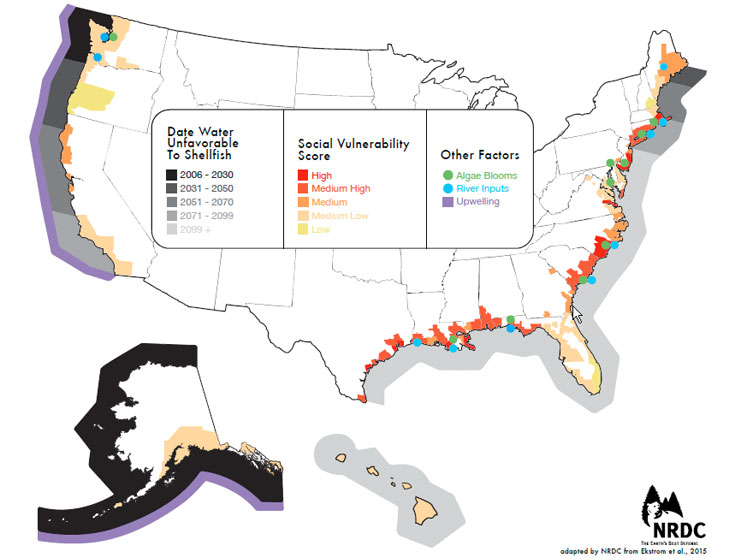 Figure: Cartoon showing all the risk factors in our study. Upwelling, river discharge, and nutrient pollution worsen ocean acidification. At the same time, ocean acidification (ocean acidity, in the figure) will reach a critical point for shellfish larvae at different dates around the country (gray tones). On land, dependence on shellfish harvests and communities’ ability to cope can be combined into a social vulnerability score (red tones).