The recent, and much heralded, Paris climate negotiations have led to a new global climate agreement. This historic deal involves 195 nations working toward a reduction in global greenhouse gas emissions and restricting future global warming to an increase of “substantially less than 2 degrees Celsius”, a substantially new target that was just one of many new components of the landmark climate agreement. Ocean Conservancy sat down with longtime friend and colleague Jay Manning, a climate and ocean expert from Washington state, to get his inside report from Paris and COP21, and what it means for the health of the world’s ocean.

Jay, tell us why you went to Paris, and what message you wanted the climate treaty negotiators to hear.
I went to Paris in my professional capacity to support the Pacific Coast Collaborative, which consists of California, Oregon, Washington and British Columbia. These jurisdictions have been working together for 8 years on climate, energy and ocean acidification. The agenda at Paris included a substantial focus on cities, states, and other jurisdictions below the national level where substantial progress on addressing climate change has been made. The message we sent was that carbon limits and economic success go together. Another important reason why I went to Paris was to advance the discussion on ocean acidification. I’ve worked on this issue with Ocean Conservancy and others for the last 4 years. I spoke out in support of an aggressive international agreement to limit carbon emissions, which is the root cause of ocean acidification, to protect shellfish farmers from my coastal state, for other coastal communities around the world and for ocean ecosystems.

What expectations did you have for how prominent the ocean would be in the discussions and how did it turn out?
From my vantage point, the health of our ocean was a prominent theme in the discussions. Ocean advocates from around the world gathered and told stories of ocean acidification and other changes caused by global warming impacting the Pacific Northwest and other hot spots around the world. My understanding is that this was quite different from previous meetings. To the disappointment of some, the agreement itself heavily focused on atmospheric carbon and limiting emissions with little explicit language on the ocean, but there was far more prominence given to the ocean than in previous negotiations.

Why is the ocean so much more prominent this year in the global discussions on climate change?
I think it’s because in Washington, Oregon, and British Columbia the impacts of ocean acidification are beginning to be felt. It started with oyster growers, and the crash in oyster stocks in the Pacific Northwest, but now it’s happening on a much larger scale. Climate impacts across the board—from the ocean to the land—are showing up much earlier than expected. Ocean acidification is being felt across the world. But, it’s not just acidification. Warming ocean temperatures and lowering dissolved oxygen levels are combining with increased acidity to threaten whole ecosystems and coastal economies.

How will the results of this historic climate agreement remedy the growing threat of ocean acidification on coastal communities and fishing businesses around the world?
The root cause of ocean acidification is the increasing concentration of atmospheric CO2, of which 25-30% dissolves into the world’s ocean. As the atmospheric concentrations go up, it also goes up in the ocean. As the pH goes down, it creates real problems for shell-forming creatures like oysters. In some places, we are seeing pH levels at 7.5 or 7.6. At that level of acidity, it’s a lethal dose for oyster larvae. Now, we’re starting to worry about lobsters, crab and pteropods, an important food source for the Northwest’s iconic salmon species. We have to get at that root cause; we have to reduce CO2 emissions substantially, and we need to do it quickly. While the text of the climate agreement doesn’t say much about the ocean, it is all about reducing atmospheric CO2—which is a very good thing when it comes to the world’s ocean.

What surprised you?
The scale of this climate meeting was staggering. 50,000 people were in Paris for this event. In the Parisian suburb of La Bourget, huge buildings were erected for all of the delegates. This was the most international event I’ve ever been to—195 nations!

What will you remember most about COP21?
Most memorable is the fact that the international negotiators did reach consensus on what is truly the most far reaching, specific agreement that has ever been reached on climate change…and they got 195 countries to agree on it. It was a huge breakthrough and success, and it was exciting to have been there. I’ll remember that most. Second, was the hospitality shown by the Parisians. They were absolutely wonderful. They were friendly, helpful, and cheerful. Following on the heels of the terrorist attacks in the city, the Parisians seemed glad we were there working on something so positive.

What’s next?
Now the hard work really starts. We should have more concerted, consistent leadership from nations across the world. That will help and be incredibly important for the long-term success of this work. I know there will still be a need for leadership at the state, county and city levels. For example, progress on energy efficiency, electric vehicles, and the growth of renewable energy sources like wind and rooftop solar will happen more at the local than the national level. These are important building blocks for progress in addressing climate change and will benefit the ocean.

As well, I am optimistic for the future and for issues that Ocean Conservancy is working on like advancing the science of ocean acidification. The Paris meeting was a demonstration of the increasing recognition of the importance of ocean health and increasing coordination between ocean acidification scientists globally. I saw scientists from France working with scientists from the Philippines and the US and so on. Today, there is much better coordination on ocean acidification research and monitoring, and we’re answering the most pressing questions first. Scientists are helping industry mitigate and adapt to the changing ocean chemistry. And on the policy side, I’m working with colleagues who are connecting policy makers from jurisdictions making progress with those just learning about the science of ocean acidification. It is a great time to be working on protecting our coastal communities and Ocean Conservancy has really led the way on what I consider to be one of the world’s great challenges. 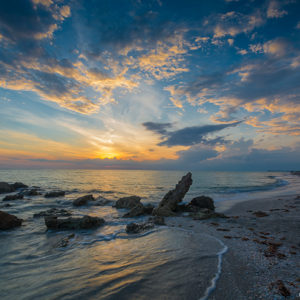