Our blog series on the lesser known (but just as cool) species of the Arctic continues with brittle stars. Read our other blogs from the series: polar cod and Arctic copepods.

Brittle stars are seafloor dwelling organisms that appear to be a quirkier, more slender version of a starfish. Although they are closely related to starfish—brittle stars differ in many ways.

Brittle stars have a distinct central disc and (usually) five skinny, flexible arms. The central disk (approximately 2.5 cm in diameter in the species Ophiura sarsii) consists of a skeleton of calcium carbonate and contains all the brittle stars’ internal organs. The disk’s appending five arms (circa 9 cm long in Ophiura sarsii) twist and coil to enable movement across the seafloor. Not only do their arms enable locomotion: brittle stars can purposely release on or move arms to evade a predator! As long as its central disk remains, the brittle star will continue to function, and its limbs will regenerate.

Brittle stars play an important role in the Arctic food web. First, they are known to be seafloor ecosystem engineers. They reshape the seafloor sediment surface and influence the distribution of other seafloor species. They also provide nutrition to fish, sea stars and crab predators. Brittle stars themselves are known to consume small organisms, feed on detrius, and/or filter feed organisms from ocean water. The mouth of brittle star, which is located on the underbelly of its disk, contains five jaws.

If you thought detachable arms was crazy, check out the alien-like Gorgonocephalus acticus. The Gorgonocephalus acticus is a basket star, a taxon of brittle stars that live in the deep waters of the Arctic. The five arms of this species repeatedly branch into smaller and smaller subdivisions, giving it a medusa-like appearance. In fact, its name means “dreaded head” in Greek and refers to Medusa and her two sisters, whose hair was made of living snakes. This species is also much larger than most brittle stars (as show in the image below). 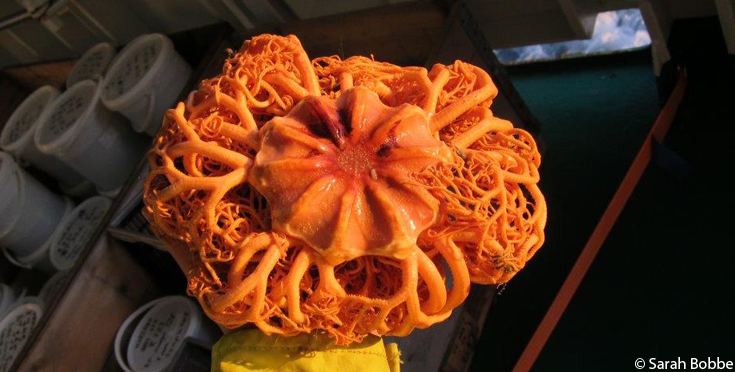 Although I adore polar bears and walrus, it is my hope brittle stars and the lesser-known (and in this case, quirkier) species residing in the Arctic receive their day in the spotlight and become known for the role they play in the fragile Arctic ecosystem. Please join me in celebrating one of many unsung (and stranger) classes of the Arctic ecosystem by sharing your enthusiasm for the brittle star!

Learn how you can help protect brittle stars and the vast diversity of wildlife who call the Arctic home.