Polar bears are the best. And if you’re reading this, chances are you’re already a fan. Regardless of your affinity for these incredible animals, there’s always more to learn.

Today marks the beginning of Polar Bear Week, and to celebrate the occasion we’ve tracked down five new facts about Ursus maritimus. Ready to brush up on some trivia?

Polar bears communicate through body language, and will often wag their heads from side to side to signal that it’s time to play. Playtime is ritualistic of mock fighting, and the perfect opportunity for polar bears to brush up on their best moves. To initiate play, polar bears will stand up on their hind legs with their front paws at their sides and chins lowered to their chest.

Polar bears have the unique ability to change their metabolic rate depending on the availability of food. This means they can devour enormous amounts of food when times are good, but can also go into a hibernation-like digestion state when there’s no food around. In fact, pregnant mothers in Hudson Bay have been found to fast for up to eight months! In Hudson Bay during the months of July through November, there often isn’t enough sea ice to hunt—forcing polar bears to conserve fat and energy.

Polar bears have a thick, under layer of fur which is transparent, not white! Much like the ice and snow, polar bear fur reflects light, causing them to appear white or yellow. Underneath their translucent fur, polar bears have black skin to better absorb the sun’s rays. 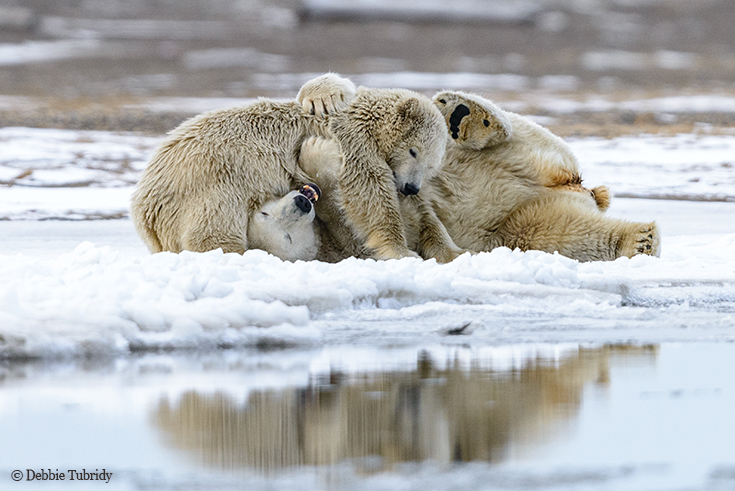 You would think that in their icy, arctic environment, polar bears spend most of their time shivering with cold! However, polar bears struggle more with overheating than they do fending off sub-zero temperatures. Since polar bears have evolved to thrive in a cold climate, they can overheat quickly when running—which explains why polar bears are notoriously leisurely walkers. A polar bear’s body temperature runs around 98.6º Fahrenheit, typical for most mammals, but their adaptation to cold weather means they have an unfortunate propensity to overheat.

Polar bears sit at the top of the Arctic food chain. As incredibly intelligent and opportunistic hunters, polar bears have even been found to feed on bigger mammals such as walruses, belugas and narwhals when given the chance.

Although polar bears have no natural predators in the animal kingdom, they still face major challenges. Today, polar bears confront increasing habitat loss as the Arctic continues to warm and sea ice continues to melt. In addition to climate change, pollutants from vessel traffic and potential offshore drilling threaten the species. Take some time this week to speak up for polar bears.

Polar bears need the support of advocates like you to combat threats such as oil spills and support a healthy and resilient ocean. Please take action today.