They’re two of the ocean’s most recognizable—and adorable—residents. But can you tell seals and sea lions apart?

Let’s start with the basics. Seals and sea lions are both in the suborder pinnipedia, a group of fin-footed mammals that also includes walruses. All pinnipeds have broad torsos and narrow hips that help them remain streamlined underwater. You can find pinnipeds all over the world, from walruses in the chilly Arctic to Hawaiian monk seals in the balmy Pacific.

But here is where the differences begin to arise. Although the term “seal” can technically apply to the 32 species we refer to as seals and as sea lions, the family Otariidae includes fur seals and sea lions, where family Phocidae includes “true” seals. Yes, it’s confusing.

The easiest way to tell them apart is to look at the ears. True seals have ear holes, where sea lions have small flaps covering their ears.

You can also look at their feet. Seals have short, stubby front feet and generally scoot along land on their bellies. Sea lions, on the other hand, have elongated front flippers that help propel them through the water and allow them to “walk” on land. If you look closely, you’ll also be able to see the different in their claws: seals have long claws and fur on their front flippers, while sea lions’ front flippers have short claws and are covered in skin.

Still having trouble telling them apart? Check out their behavior. Seals are more solitary and spend most of their time alone in the water, only coming ashore to mate. On the flip side, sea lions are a rowdy bunch. They can gather in rambunctious groups called rafts or herds of up to 1,500 animals. And they are loud: where seals make soft grunts, sea lions have sharp barks to communicate.

There you go! The next time you’re faced with an unidentified pinniped, you’ll be able to tell exactly which kind it is. 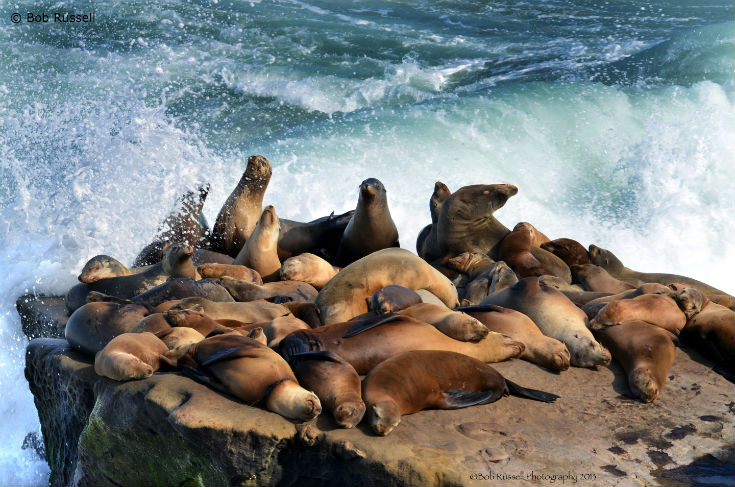