The Blue-Ringed Octopus: Small but Deadly

At first glance, the blue-ringed octopus looks perfectly innocuous. Its psychedelic coloring and pint-sized packaging make it seem more adorable than alarming. But don’t let its cuddly exterior fool you: this tiny octopus can kill you. And quickly.

Native to the Pacific Ocean, the blue-ringed octopus can be found in the soft, sandy bottom of shallow tide pools and coral reefs. When not seeking food or a mate, blue-ringed octopuses often hide in crevices, shells or marine debris. If you catch them outside of their cozy hiding spots, it’s easy to see how the animal gets its name: when threatened, bright blue rings appear all over its body as a warning signal to potential predators.

Although all octopuses (as well as cuttlefish and some squid) are venomous, the blue-ringed octopus is in a league of its own. Its venom is 1,000 times more powerful than cyanide, and this golf-ball sized powerhouse packs enough venom to kill 26 humans within minutes. It’s no surprise that it’s recognized as one of the most dangerous animals in the ocean. 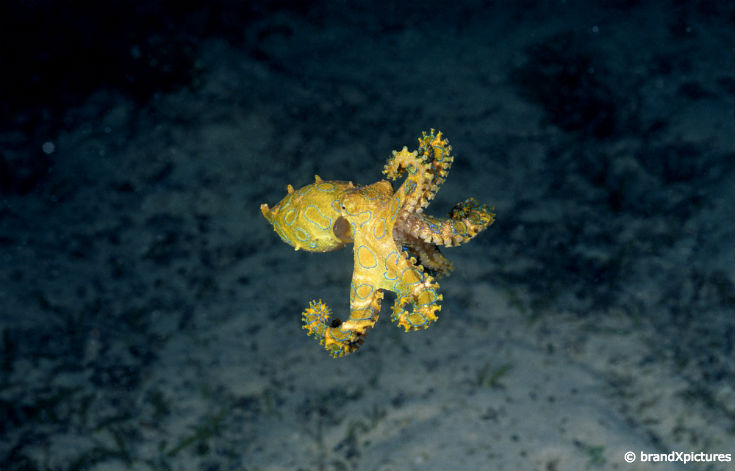 Blue-ringed octopuses produce a potent neurotoxin called tetrodotoxin, a potentially-deadly substance also found in pufferfish. The venom is produced by symbiotic bacteria in the animal’s salivary glands and is more toxic than that of any land mammals. It’s primarily used when hunting: the octopus captures crabs, shrimp and small fish by pecking through its prey’s exoskeleton with its beak and inserting the venom. Then it will use its beak to pick off meat while its prey remains helplessly paralyzed. In the end, only the tough outer shell of its prey remains.

So, what happens if you’re bitten by a blue-ringed octopus? First, the venom blocks nerve signals throughout the body, causing muscle numbness. Other symptoms include nausea, vision loss or blindness, loss of senses and loss of motor skills. Ultimately, it will cause muscle paralysis—including the muscles needed for humans to breathe, leading to respiratory arrest. There is no known antidote, but victims can be saved if artificial respiration is started immediately.

If you ever encounter this blue and yellow beauty, back away in a hurry—its bite is usually painless, so you might not know you’ve been bitten until it’s too late. Fortunately, the blue-ringed octopus isn’t aggressive; it’s only likely to bite humans if cornered or handled. In fact, there have been no known deaths from its bite since the 1960s. As long as you keep your hands to yourself, you should be fine.