George Leonard: I am a Scientist

As the buzz around alternative facts gets louder and research budgets are slashed, the importance of highlighting the role of science in our lives and the people behind it becomes even more important. Ocean Conservancy is proud to introduce you to our best and brightest scientists through the “I am scientist” series. We hope you will be inspired by people that have an insatiable curiosity about the natural world, a sharp mind that is dogged in its pursuit of facts and a tenacity to find solutions to tackle some of the biggest ocean challenges of our time.

In this kickoff interview, we invite you to get to know George Leonard, Ocean Conservancy’s Chief Scientist, who spoke to Erin Spencer.

Erin: What science experiment most fascinated you as a kid?

George:  As I kid in the 70’s, I watched every episode of The Undersea World of Jacques Cousteau that came out. One of the most memorable experiments for me took place in the “Sleeping Sharks of Yucatan” where 6-foot-long sharks appeared to sleep in underwater caves with no apparent water flow. Scientists knew at the time that sharks generally had to swim to stay alive. Cousteau and his crew released nontoxic dye in the water near the sharks and observed that these sharks could actually pump water across their gills where no apparent current was present. I thought it was so cool that scientists could do simple experiments like this to learn something new about how the natural undersea world worked. I was hooked by bedtime! And I vowed to get my scuba license as soon as possible, one year later at the age of 13.

Erin:  Who is your scientific hero and why?

George: Nowadays my scientific heroes are marine biologists who play an active and impactful role in society to help people understand and tackle the challenges that our ocean faces.

In many respects, Dr. Jane Lubchenco (former NOAA Administrator) is solely responsible for giving academic scientists the confidence to play leadership roles outside the classroom. She realized that coastal communities and ocean-dependent industries could benefit from a closer relationship between scientists and the people whose livelihoods depend on the very ecosystems that scientists study every day. Seventeen years ago, I worked with her to launch an effort called COMPASS. It was a novel partnership between scientists, a communication agency, a book publisher, and a public aquarium to help scientists step out of what is often called the “ivory tower.” It played a critical role in making marine science more accessible and relevant to people’s lives.

Erin: When did you decide you want to be a scientist?

George: I was always interested in math and science but it took me until I was 23, two years out of college, and working at a financial company in Boston to get to that realization. One day I was at New England Aquarium, looking up at the giant ocean tank when I whispered to myself “This is what I really want to do—I want to study the ocean, how it works, and why it matters.” I went home that night and started looking up information on graduate programs. Within a year, I had moved to California and was diving in the kelp forests off Cannery Row in Monterey, learning how these incredibly beautiful ecosystems functioned and uncovering why a healthy Monterey Bay remains so important to the coastal communities of California today.

Erin: Why, personally, does science matter to you?

George: Science is personal because I see it in nearly everything.  I am writing this from the doctor’s office, where I am picking up a prescription for antibiotics that will beat back an infection which generations ago might have killed me. I drive a car smart enough to sense an impending collision and avert disaster, an engineering marvel founded on a deep appreciation of the fundamental laws of physics. I am able to buy sustainable wild-caught fish at my local fishmonger. Its availability is a direct result of resource managers adhering to a scientifically-determined estimate of how many fish are in the sea and how many can be sustainably caught. I live in a state that is prone to natural disasters, from drought and fire to flood and landslides. Over 200,000 of my fellow residents narrowly averted disaster when flood control engineers took emergency measures to reduce water levels in the Oroville dam last month. High level math and engineering was needed to keep my neighbors safe. And I am proud to say I am part of a community of thoughtful and committed scientists across the West Coast that is working to understand how our changing climate will impact our communities, from residents high in the Sierra Nevada, to farm workers in the agricultural fields of the central valley to the fishermen and coastal residents along the shores of San Francisco Bay. Many aspects of my life wouldn’t be the same without the hard, honest, committed work of scientists. For them, I am deeply grateful. 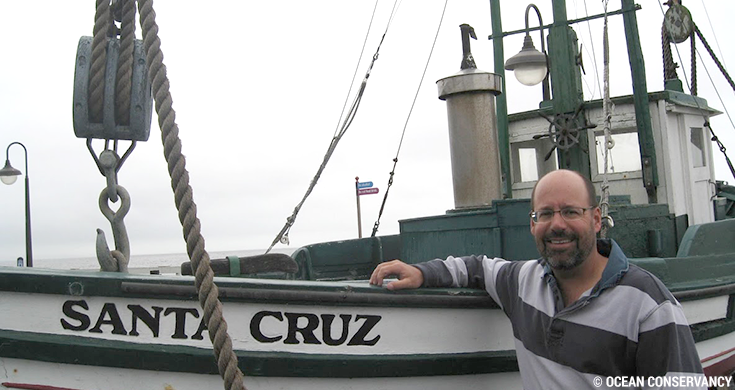 Erin: What’s the hardest thing about choosing science as a profession?

George: Choosing a career in science isn’t easy but it can deeply rewarding. You need to have a passion for learning and applying that learning from school and through research to solve problems to make the world a better place for all of us. This takes drive, diligence and perseverance. You likely won’t get rich doing it but in many ways, you will live a life of service, which is pretty noble.

Erin: How does your science help people and communities?

George: As Chief Scientist at Ocean Conservancy, I work with a team of experts to develop new knowledge and insights on problems that matter to the oceans and to people and use this information to develop actions that improve the ocean and people at the same time. Everything we do at Ocean Conservancy is founded on a deep understanding of science and respect for the independence of the scientific process, for if we don’t understand the problem objectively, we can’t develop solutions that will work for the long haul.  One of the best examples for me is our work on the establishment of a 1,000 mile long string of marine protected areas (MPAs) in California that is the envy of the rest of the world. Science was the foundation of this work, but it was designed to improve people’s lives too, whether they were a commercial fisherman or a recreational scuba diver. Ten years in the making, California’s MPAs are now delivering: the fish and fishermen are more abundant than ever.

Erin: What is the one thing you would tell a kid interested in science as a career?

George: Ask questions: science is a journey of discovery and the only way to learn new things is to ask questions.  If you find out asking (and answering) questions related to the natural world is fun, then science just might be a career path to you.

Erin: What is your favorite science joke?

George: There isn’t just one; there are books and books of them published by the one and only Gary Larson, who wrote The Far Side for 15 years from 1980 to 1995. You can flip to any page of his books and find yourself having laughed yourself right out of your chair. I didn’t generally think science was humorous until I came across his cartoons in the mid 1980’s when I was in college. While Gary Larson hasn’t published a Far Side cartoon for over 20 years, his work still causes scientists everywhere—including me—to laugh right alongside him.