The following is a guest blog from Dr. Chelsea Rochman, who is currently serving as a Smith Postdoctoral Fellow in Conservation Biology.

For decades, we have heard concerns regarding the entanglement of marine mammals and sea turtles in marine debris. We see images of seabirds, turtles and whales washing up with bellies full of trash. And more recently, we see constant media attention on microplastics—small pieces of plastic debris less than five millimeters in size. Marine debris is everywhere. It is reported from the poles to the equator and from the surface to the seafloor. It has been recorded in tens of thousands of individual animals encompassing nearly 600 species.

With such vast and abundant contamination, comes a perception that marine debris is a large threat to the ecology of our ocean. As part of a working group at the National Center for Ecological Analysis and Synthesis (NCEAS) facilitated by Ocean Conservancy and focused on marine debris, I worked with a group of scientists to ask if the weight of evidence demonstrating impacts matched the weight of this concern? The findings of our analysis have just been published.

The Weight of Evidence 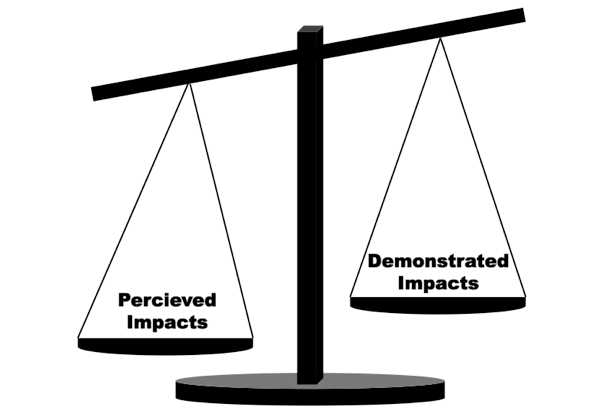 “What do we actually know about the ecological impacts of marine debris?

To answer this question, we dove into the growing scientific literature and quantified perceptions regarding impact and evaluated whether individual studies had rigorously tested and demonstrated an effect.

Overall, we found hundreds of perceived impacts and substantial evidence of demonstrated impacts caused by marine debris. We showed that in almost every case where a perceived impact was properly tested, an impact was demonstrated. While we found most evidence at suborganismal levels, it is not a foregone conclusion that sublethal effects due to debris will result in an ecological impact. To be sure that such an ecological response exists, requires a heavier weight of evidence; i.e. more science!

Show Me the Data!

The majority of all impacts were caused by plastic items. For example, my own studies have demonstrated changes in gene expression related to endocrine disruption and stress in the livers of fish exposed to microplastic (Rochman et al., 2013 Sci Reports; Rochman et al., 2014 STOTEN). Still, evidence of demonstrated impacts above suborganismal levels remains extremely sparse, mainly demonstrating death to individual organisms. Causes of impact were mostly due to ingestion, followed by entanglement and smothering. The most common items reported to cause effects at the organism or assemblage levels were lost fishing gear and other items of plastic debris such as rope, bags, straws and degraded fragments. Interestingly, a recent study led by Ocean Conservancy and CSIRO determined that these same marine debris items are perceived to be among the most hazardous by experts in the field.

Perceived, tested and demonstrated impacts of debris. Rows in each matrix represent different levels of biological organization. Columns represent order-of-magnitude sizes of debris from smallest (left) to largest (right). Shading in the individual cells of the matrix represent the magnitude of a) perceived b) tested and c) demonstrated impacts of debris. White represents 0, light grey 1 – 5, grey 6 – 10, dark grey 11 – 20 and black > 21 impacts. Diamonds in matrix 2c correspond to cells where at least one impact has been demonstrated by correlative evidence.

Although we conclude that the quantity and quality of research evaluating ecological impacts requires improvement for risk to ocean health to be determined with precision, scientists have generated a lot of evidence over the last several decades regarding widespread contamination and suborganismal impacts of marine debris. Thus, there is enough information for policy makers, non-governmental organizations and industry to work together, such as through the Trash Free Seas Alliance® to strategize ways to invoke positive change now while scientists continue to rigorously increase our understanding of the ecological consequences of debris on ocean health.

For more information, the entire article can be found here.