With mass coral bleaching in the Great Barrier Reef making headlines all over the world this summer, we wanted to check in with Tripp Funderburk of Coral Restoration Foundation to learn how corals in our part of the ocean are faring.

First, what is the big deal about coral reefs?

Coral reefs are the rainforests of the sea. They provide three-dimensional habitat for an astonishing variety of plants and animals. While they occupy less than one percent of the ocean floor, coral reefs support more than 25% of all marine life. They also shelter shorelines from storms and erosion, and provide food and jobs for coastal communities dependent on tourism and fishing.

How are coral reefs in the United States and the Caribbean faring?

Stressors such as climate change, ocean acidification, diseases, overfishing, sedimentation, and pollution threaten coral reefs around the world.  Over the last 40 years, coral reefs around Florida and throughout the Caribbean have become degraded due to a multitude of these and other stressors, but the largest decline occurred after the outbreak of White Band Disease in the late 1970s and the die-off of the long-spined sea urchin (Diadema antillarum) due to an unknown pathogen in 1983. NOAA has found that elkhorn (Acropora palmata) and staghorn (Acropora cervicornis), two previously dominant, reef-building corals, have declined between 92-97% since the 1970s, and both are now listed as threatened under the Endangered Species Act. Without these fast-growing, keystone species, Caribbean coral reefs are deteriorating, and the fisheries, wave-protection, and tourism generated by healthy reefs are at risk.

Can these corals be saved?

We’re working on that at Coral Restoration Foundation, here in Key Largo, Florida. We are involved in education, research and monitoring, as well as active reef restoration projects. For example, in our coral tree nurseries, we grow elkhorn, staghorn and other corals and are able to outplant them back onto degraded reefs. Our nurseries serve as an ark to preserve the genetic diversity of endangered corals and re-establish healthy coral thickets that are capable of sexual reproduction. 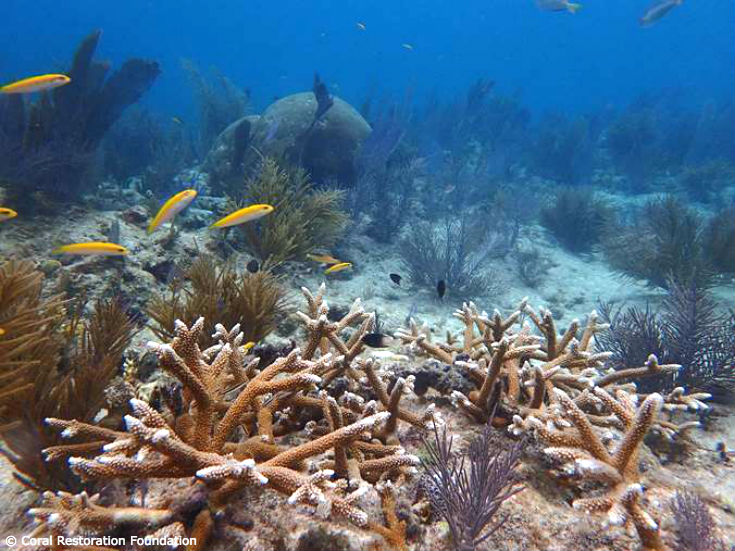 Coral Restoration Foundation currently has five coral tree nurseries in Florida that house more than 40,000 corals. In 2015 alone, more than 22,000 corals were outplanted throughout the Florida Keys with the help of volunteer divers. This kind of project, which NOAA calls “population enhancement” or “restocking,”  is part of the Recovery Plan released by NOAA’s National Marine Fisheries Service last year.

The structure of the Florida Reef Tract still exists, but the live coral cover and three-dimensional habitat that elkhorn and staghorn provide is declining. Because Acropora colonies are now scarcer, they may be too far apart for high fertilization success during spawning events.  Our organization is working to fill in these gaps by creating healthy thickets of genetically diverse coral that can sexually reproduce and encourage natural recovery. We have found great success with our methods and are continuously monitoring to track the health of our outplanted colonies.

How can I get involved?

The Recovery Plan for elkhorn and staghorn corals provides a blueprint for restoring degraded reefs, but it won’t be implemented without funding and support from Congress, the Administration, and the public. Coral Restoration Foundation and Ocean Conservancy are working together to create the support and political will to implement the actions outlined in the Recovery Plan. If you would like to join our effort to support the Recovery Plan or learn more about our restoration efforts, visit coralrestoration.org or email [email protected].

Coral Restoration Foundation is a nonprofit ocean conservation organization working to restore coral reefs, educating others on the importance of our oceans, and using science to further research and monitoring techniques.

Tripp Funderburk is the Director of Policy for the Coral Restoration Foundation.  Mr. Funderburk previously worked in government relations with the Livingston Group and the Washington Group, and served as a legislative assistant for Appropriations Committee Chairman Bob Livingston.