A conversation between Ocean Conservancy’s former CEO Andreas Merkl and Nainoa Thompson, president of the Polynesian Voyaging Society and navigator of the iconic Hōkūle‘a, as Hawaiʻi hosts the IUCN World Conservation Congress.

With a shared passion for our ocean, Merkl (@AndreasMerkl) and Thompson spoke about experiencing unparalleled beauty on the water, the plague of plastic pollution in our ocean and the importance of bringing people together to find solutions.

The Polynesian Voyaging Society and Ocean Conservancy will be part of an International Coastal Cleanup organized by the United States Department of State in James Campbell Wildlife Refuge on September 9, 2016. For more than 30 years, Ocean Conservancy has rallied the world’s biggest single-day volunteer effort on behalf of the ocean through the International Coastal Cleanup.

The following was edited for clarity and length.

Andreas Merkl: We are both ocean people because we really want to be, but it is rare to see anybody who is as connected as you are. Being as deeply connected to the ocean as you are, how do you square both happiness and sadness when it comes to the issues it faces?

Through my journey around the world, we’re recognizing how much we’ve hurt the earth. We made a trip to Palmyra, sailing eleven hundred miles, a number of years ago, and we didn’t even get a single [fish] bite. It was like an empty ocean. We get a sense of the life not just by what’s in the oceans but by what’s in the air, the seabirds. It’s just clearly diminished.

AM: You have that visceral sense that it has been degraded, that there’s fewer fish, fewer birds. I’ve heard this from other sailors as well, lifelong sailors with many crossings, that say that sometimes there’s a sense of dread and loneliness that they feel now, because it seems so depleted.

NT: Yet when we got to the southern tip of Madagascar and the coast of South Africa, oh my God, it was one of the most amazing experiences I ever had.

NT: It was like “Avatar” truly. There was so much bioluminescence. You could see so much. You could actually see small fish pass through the waters at night. It was just amazing. Then you get up to Cape Town, and it’s just teeming with those super pods of whales. We’ve seen the brilliance of life, too. We’ve seen just the amazing, amazing power of the ocean in certain spaces. We’ve also seen the emptiness.

AM: Tell me about what you actually see out there in terms of plastic pollution. 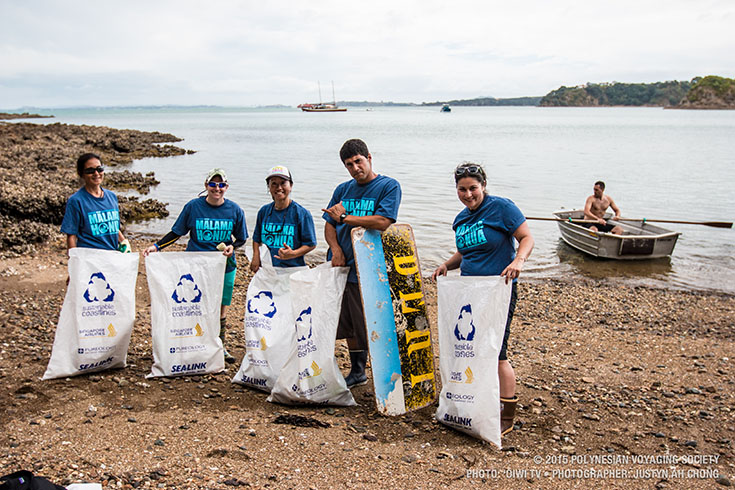 NT: What’s good about the deck of the canoe, because we’re not sailing with instruments, it requires the navigator to constantly be observing. They’re looking at the surface of the oceans all the time. It depends really on the conditions of the ocean to see plastics. If it’s windy and rough, they could be there, you just can’t see them. I’ll tell you, when you come in close to some of these countries, and I don’t want to blame any of the countries, but it’s pretty appalling, the amount of stuff that’s just thrown into the ocean with no regard.

You spend a lot of time talking to leaders. I know that you had Ban Ki-moon on your boat. You talk to senior officials in the countries that you go to, and heads of state. Do you also talk to them about really concrete action?

NT: Many times what I do, like with the United Nations, it’s really trying to make connections between organizations and working with the leaders to try to bring some kind of larger unity to the movement of things like the Pacific Islands and the health of the ocean,  climate change, and all these kinds of issues. I’m trying to convene, and I’m trying to bring people together. I think that’s part of the equation to really have success.

AM: What is your journey for the next eleven months?

NT: Once we reach Montreal, we will start heading south towards Florida, and once we are in the Caribbean, we’re looking for inspiring stories as we make our way toPanama. In the Pacific side of Panama, we’re going to go out to at least Cocos Island, Galapagos, probably Ecuador. From Ecuador we go down to Rapa Nui (Easter Island) to Polynesia. Then we go to Pitcairns, Marquesas. Then down to Tahiti.

The voyage home from Tahiti to Hawaiʻi is really a mechanism to unify Pacific leadership around the key issue of protecting the oceans.

You need to come with us.