Today, the National Snow and Ice Data Center announced that sea ice in the Arctic Ocean hit the second lowest minimum on record during the summer of 2016.

Sea ice is the foundation of the Arctic ecosystem. Wildlife like the iconic polar bear depends on sea ice to hunt prey such as ringed seals, forage and breed. As their sea ice habitat continues to diminish, it is estimated that by 2050, global polar bear populations will decrease by 30%.

Sea ice is tied to indigenous culture and the subsistence way of life. The Arctic is home to indigenous communities that depend on a healthy marine environment to survive. As sea ice diminishes, many communities are being forced to travel much further to hunt, and face new challenges like more frequent, more severe storms.

Sea ice loss makes the Arctic vulnerable to increasing vessel traffic — and the risks that come with it like higher risk of oil spills, impact of noise pollution on marine wildlife, possible whale strikes, and the introduction of invasive species. By 2025, vessel traffic through the Bering Strait is projected to increase anywhere from 100 – 500% from what it was in 2013. Recently, the luxury ship Crystal Serenity became yet another symbol of a changing Arctic as she cruised through the Northwest Passage. 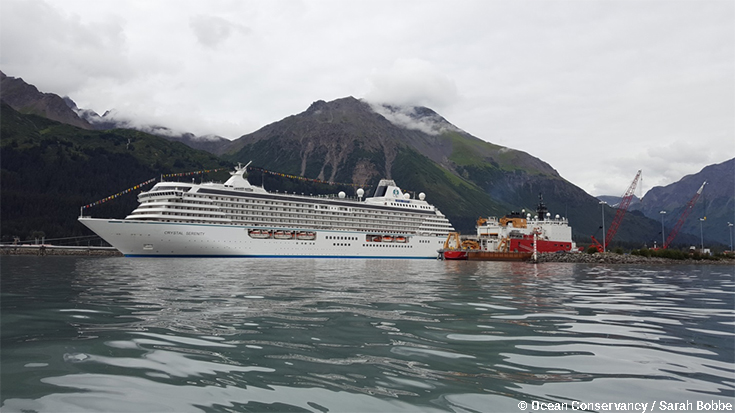 As summer sea ice diminishes, ships like the Crystal Serenity will be increasingly able to navigate through the Arctic.

Sea ice plays a vital role in regulating heat on a rapidly warming planet. Melting snow and sea ice reduces the ability of the Arctic region to reflect sunlight.  While this phenomena accelerates global warming worldwide, the Arctic itself is warming two times faster than the rest of the planet.

What Ocean Conservancy is doing:

As a science-based conservation organization with a deep commitment to the Arctic, Ocean Conservancy is working to better understand and address the impacts of climate change and sea ice retreat. By promoting integrated Arctic management, working with indigenous  communities, and promoting vessel traffic measures like designated shipping routes, we hope to mitigate the causes and impacts of a rapidly warming Arctic.