An interest in the natural world can spring from unlikely places. For Eddie Love, a recent college graduate and current RAY Fellow at Ocean Conservancy, a love for the fastest land animal in the world inspired his decision to launch a career in conservation.

“I had an affinity for cheetahs at a very young age. I found myself watching Animal Planet instead of cartoons,” Eddie says. “I always wanted to be as fast as them. I play tennis so I try to channel my inner cheetah and get to every ball. They’ve always been sort of an underdog in the cat world. That’s how I felt growing up. I was small, so they motivated me to be better.”

A “southern boy at heart,” Eddie grew up in Auburn, Alabama, where trips to the zoo and television programs about African animals cemented his desire to study wildlife ecology and management. At Auburn University, Eddie was the only African American male in his major, which made him more aware of the lack of diversity that often exists in conservation-related fields.

It’s a problem that the RAY Marine Conservation Diversity Fellowship seeks to address. The new program—named after Roger Arliner Young, the first African American woman to receive a doctorate degree in zoology in 1940—was designed to bring new, diverse voices to the forefront of conservation science, policy and action. 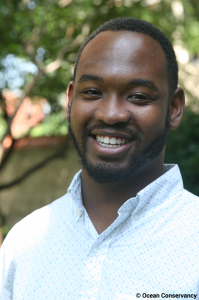 At Ocean Conservancy, Eddie’s Ray Fellowship work has involved immersing himself in research for a new Indonesian Fish Reform Program, which hopes to address overfishing in the Southeast Asian nation. Focused on tuna and reef fish like snappers and groupers, the project is looking at economic infrastructure and developing a “simple model that could produce sustainable fisheries across Indonesia,” Eddie says.

The RAY fellowship has “definitely opened my eyes to how important the ocean is,” Eddie says. It has also given him important guidance and professional networks to support his conservation career. “I’ve made so many connections in the past few months that I wouldn’t have gained without this,” he says.