Bet you can’t guess where you’re likely to find me? Coral reefs, that’s right! Just like other reef sharks, the coral reef is my favorite place to hang out. I like to swim in shallow waters, usually with my dorsal fins above the surface showing off my black tips. So, now you can see how I got my name—clever, right?

My thick skin is covered in a sheath of tooth-like scales called denticles. These help me swim quickly through the water and protect me from pesky parasites! We are viviparous sharks—producing live pups instead of eggs—and give birth up to four pups each year. The pups reach maturity around four years old for males and seven years old for females.

While most sharks are solo hunters, we believe in team work! You’ll find us hanging out together and relying on one another to catch prey in packs. When we find a school of fish, we will circle our prey into a tight ball before going in for the kill. Some researchers have found that we may actually be social creatures with close friends!

My home in the coral reefs is being damaged by ocean acidification—which occurs when the ocean absorbs carbon and becomes acidified. I love living among thriving reefs, but increasing acidification degrades the physical structure of these reefs, putting my habitat and food supply at risk. This affects all the creatures living among the reef—not just my team of fellow blacktip reef sharks.

We can jump fully out of the water during feeding frenzies.

I live and hunt in and around the edges of reefs because they have an abundant supply of food! But I’m not as menacing as I might seem. I am curious about divers swimming in my territory, but I’m quite timid and easily frightened. 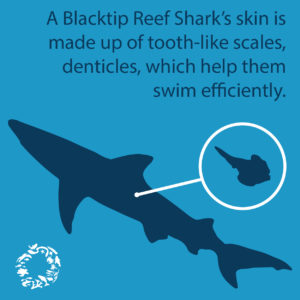 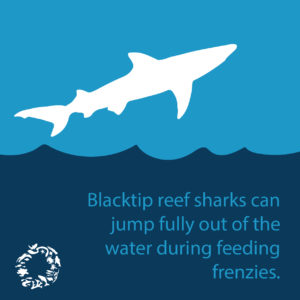