Bottlenose dolphins are incredibly intelligent and are known as problem solvers and quick learners. They have an intricate system for communication called echolocation, which uses the reflection of sound to figure out the location of objects. Bottlenose dolphins often use it to track prey. They also use squeaks and whistles to “talk” with other dolphins, and even have a unique “signature” whistle to identify themselves. You can spot bottlenose dolphins swimming close to shore, breaching (shooting out of the water) and lobtailing (slapping their tails onto the surface of the water). They will also jump high out of the water and do flips to communicate, shake off parasites and sometimes just for fun!

Bottlenose dolphins are sleek and streamlined, making it easy for them to reach speeds up to 18 miles per hour. They are marine mammals, meaning they need to breathe air, so they surface to breathe two or three times per minute. On any given day, they can swim up to 100 miles.

A female dolphin and her calf stay together for three to six years. Often a female will return to her own mother or other female relatives to raise her new calf.

The main threats facing bottlenose dolphins include entanglement in fishing nets, impacts from climate change and habitat degradation. They are also impacted by harmful algal blooms and human disturbance, like vessel strikes. Fortunately, their populations are considered of “least concern” by the IUCN, meaning they are not considered threatened or endangered. 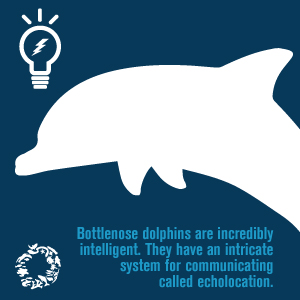 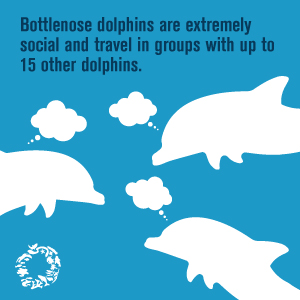