If you’re near California sea lions, you might hear them before you see them—they’re a loud bunch. They are one of the noisiest of the pinniped species, which include seals, sea lions and walruses. California sea lions will bleat, growl, roar and bark to send warning signals, attract mates and more. Mothers even use specialized calls for their young: When the cow returns from hunting for food, she will vocalize a unique call to her offspring, who will follow the sound of her voice. The cow will smell the pup to make sure it’s the right one and then proceed to feed it.

Males use sound to defend their territory, too. They will bark on land and underwater to fend off intruders and show off to other males in the area. Body movements are just as important: they will lunge at other males’ flippers, shake their heads and stare at opponents to send maximum “don’t mess with me” vibes.

California sea lions are faster than they look. They can swim up to 25 miles per hour underwater—that’s faster than any other sea lion or seal! That’s because they have streamlined, torpedo-shaped bodies that help them power through the water with the help of their strong front flippers. Underwater, their back flippers help them steer, and on land they help push the sea lions forward as they “walk.”

California sea lions have thick layers of blubber to help keep them warm while they swim. They also have fur that traps water and holds it close to their bodies to serve as another protective layer. Sometimes these heating methods are a little too effective and they can overheat. When that happens, they will dip a flipper in the water or toss sand over their backs to cool off.

Ever wonder how you can tell the difference between a sea lion and a seal? Seals have ear holes, while sea lions have visible ear flaps. Also, sea lions use their fore-flippers to propel through the water and “walk” on land, where seals scoot along on their bellies on land.

California sea lions are considered of “least concern” by the IUCN, meaning they aren’t considered threatened or endangered. Their populations are also increasing, which is good news. They are threatened by invasive species and diseases, as well as pollution. 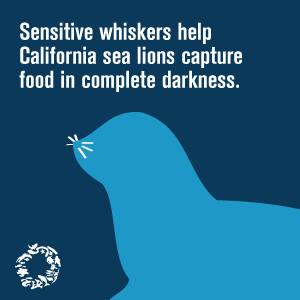 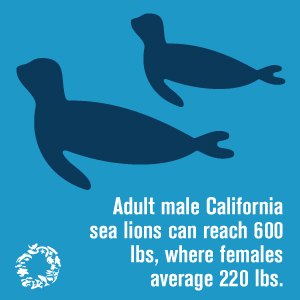