California sheephead are easily recognizable by their distinctive black and red coloring. They are also one of the biggest, toothiest fish in the kelp forest. They live in small groups along the rocky coastline of California. By day they forage for food, but at night they cover themselves in mucus and hide under rocks or in crevices to stay out of the eyes of predators.

California sheephead are keystone predators, meaning they serve a very important role in the ecosystem. Their strong appetites are helpful to kelp forests. By feeding on lobsters and grazers, like urchins and gastropod mollusks, sheephead keep them from overgrazing on kelp. They help keep the forest healthy and in balance.

California sheephead are protogynous hermaphrodites, meaning they’re born as females and some switch to males as adults. They form harems where one dominant male travels around with many females. If he dies or leaves the group, one of the remaining fish will switch from female to male and take his place.

California sheephead make up a very popular fishery. Both commercial and recreational anglers fish for sheephead, typically using hook and line or traps. They are considered “Vulnerable” by the IUCN, and there are restrictions in place to make sure the population isn’t overfished, including size limits and season closures. Setting maximum size limits can help ensure large, mature females (who can produce a lot of eggs) stay in the ecosystem. It’s important to ensure there is healthy population, as they are a keystone species and have an essential role in the kelp forests. 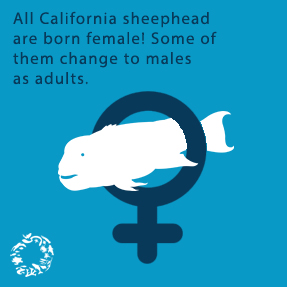 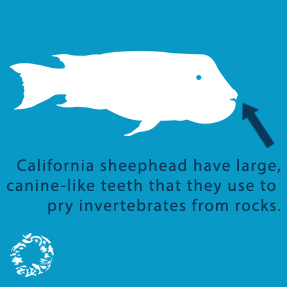