Known for their bright yellow-orange color (like a canary!), canary rockfish live in the deep waters of the eastern Pacific Ocean. As a juvenile, they live in shallower waters around rocky reefs, kelp canopies and artificial structures like oil platforms. As adults, they move into rocky bottoms and outcrops in deeper waters.

Canary rockfish are a bit unusual when it comes to their young. Most fish will “broadcast spawn,” meaning fertilization of embryos happens in the water column. Canary rockfish like to keep their young a little closer—fertilization and embryo development is internal, not external, and females give birth to larval young. They also produce many more eggs than other rockfish species—one female can produce between 260,000 and 1.9 million eggs!

Because they are slow growing, long-lived and late to mature, it’s difficult to rebuild stocks after our numbers get low.

Canary rockfish have historically been a popular species among commercial fishers, and their numbers declined over time, leading them to be declared overfished in 2000. In addition to being overfished, they were often caught up as bycatch in other fisheries like salmon. Fortunately, sustainable management practices helped canary rockfish rebound, and in 2015, they were declared “rebuilt,” meaning there were enough to maintain a healthy population. 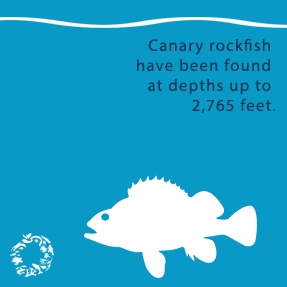 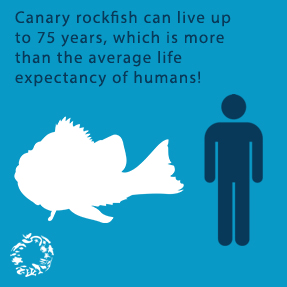