Green sea turtles are unique—they are one of the largest species of turtle and the only turtle that is strictly herbivorous as an adult (although juvenile green sea turtles will also eat crabs, sponges and jellyfish). Green sea turtles eat sea grasses and algae, which results in the green-colored fat and cartilage that inspired their name. Like all sea turtles, green turtles have a protective shell but can’t pull their head and flippers inside like land turtles can.

Green sea turtles nest on the same beach where they hatched. Since they don’t reach sexual maturity until at least 20 years old, this is even more impressive. So, how do they find their way home more than 20 years later? Green sea turtles actually use the Earth’s magnetic forces to navigate their way home. At night, they crawl onto the beach and lay somewhere between 85-200 eggs under the sand. After two months, the juvenile sea turtles will emerge to dodge predators like birds and crabs in a mad dash to the ocean.

Like humans, green sea turtles breathe oxygen. Unlike humans, they can spend up to two hours underwater before they need to come up to the surface to breathe. Green sea turtles can also survive by drinking salt water because are able to excrete the extra salt through “salt glands” behind their eyes.

Green sea turtles are endangered and face a wide range of threats throughout their habitat. They can become entangled in marine debris like fishing nets or plastic strapping bands, which could cause them to drown. They also often mistake other debris like plastic bags or little plastic fragments as food. Green sea turtles are also prone to a tumor disease that can be fatal.

If that wasn’t enough, climate change is making it even harder for green sea turtle populations. Rising sea levels can flood nesting beaches and make it harder for females to lay their eggs. Additionally, temperature impacts the sex of the eggs—cooler eggs produce males and warmer eggs produce females. If the average temperature of the nests increases, it could result in a disproportionate number of females to males, making it harder for sea turtles to find mates. 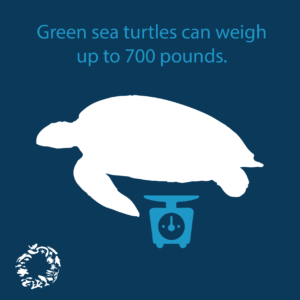 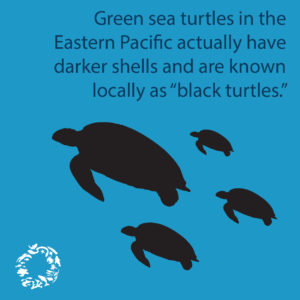