Hammerhead sharks are one of the most recognizable sharks in the sea! No one has a head quite like theirs, which is where they got their name (no surprise). Hammerhead sharks have very wide-set eyes, which gives them a better field of vision than other sharks. Thanks to their ampullae of Lorenzini (electoreceptors that are sensory organs found in sharks, rays and a few other fish), hammerhead sharks can easily detect their prey. These organs are like a sixth sense. Hammerhead sharks can find the electrical fields of prey species, even when they’re buried under the sand.

There are nine species of hammerhead shark, most of which are generally pretty small in size. The biggest is the great hammerhead, which can grow up to 20 feet long!

Hammerhead sharks have a special muscle that lets them move their head up and down. Just another reason their distinctive head makes them one of a kind!

Hammerhead sharks like to hang out in groups, especially during the summer when huge numbers of them migrate to cooler waters. Hammerhead sharks also take great pride in their appearance, especially their fins. Like their head, they’re a bit unusual—their dorsal fin is very tall and shaped like a sickle.

Unfortunately, humans like their fins, too. Many hammerhead sharks have been killed for their fins to be used in shark fin soup, as well as for their liver oil for vitamins. Sometimes people just slice off the fins and dump the hammerhead shark back into the ocean, where they bleed to death. Plus, they’re at risk for being caught as bycatch when fishermen catch them while they’re looking for food. Because of these threats, many hammerhead sharks are threatened or near threatened and some species, like the great hammerhead and scalloped hammerhead, are endangered. 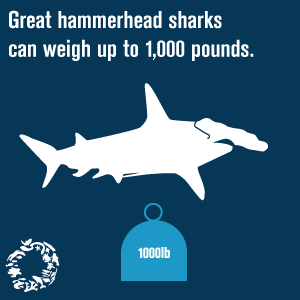 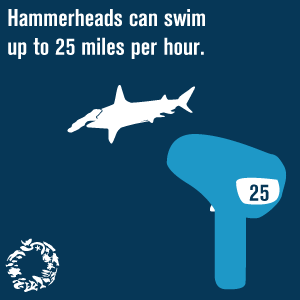