Humpback whales are hard to miss—they can grow to be bigger than a school bus and weigh 40 tons! If their size wasn’t enough to catch your attention, humpback whales are also known for their acrobatics. Humpback whales can use their powerful fluke, or tail fin, to launch themselves out of the water. This is called breaching and is a favorite of whale-watching tours around the world. Scientists suspect humpback whales breach and slap their fins and flukes on the surface as a way of communicating.

Humpback whales also communicate through their iconic “songs.” Their songs are longer and more intricate than any others in the animal kingdom! Only males sing, and all members of a group sing the same song at the same time. These songs consist of whistles and low moans and gradually change over time (it would get boring singing the same song over and over!).

Humpback whales reach sexual maturity between four and 10 years old, after which females birth a calf once every couple of years. Calves are between 13 and 16 feet long when they’re born and double their length after just one year.

Unfortunately, their extensive travels expose humpback whales to a wide variety of threats. Because of their large size and slow speed, they used to be a favorite of the whaling industry and were almost driven extinct in the mid-1900s. Commercial whaling bans allowed humpback whale populations to recover, but they still struggle with pollution, vessel strikes and entanglement in marine debris. Also, because they rely on noise to communicate (remember their famous songs?), increased noise from human activity such as drilling and increasing vessel traffic can disrupt foraging, masking the sounds they use to communicate and locate prey. Accounting for their migration routes when planning shipping routes, offshore wind and other ocean uses could go a long way to ensuring humpback whales make it to their destination safely. 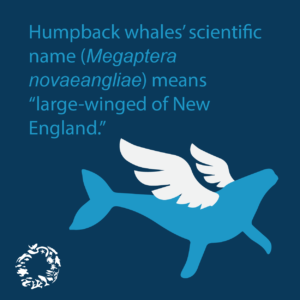 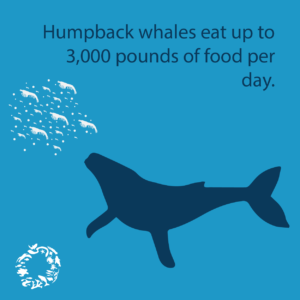