Narwhals are among the rarest animals in the ocean. Narwhals are known for their distinct tusks, which landed them the nickname “unicorns of the sea.” But their “tusk” is actually a tooth! Their teeth are very sensitive and have up to 10 million nerve endings inside each one. All narwhals are born with two teeth, but their teeth patterns change as narwhals get older. Males usually have one tooth that becomes much more prominent than the other (the tusk), and females typically lose their teeth.

Narwhals are porpoises and are related to orcas, harbor porpoises and bottlenose dolphins. Porpoises travel in groups called pods. Narwhal pods are usually made up of anywhere from 10 to 100 individuals, but sometimes their pods can number almost a thousand.

Narwhals prefer to stay closer to the ocean surface, but they can dive up to 5,000 feet.

Narwhals like traveling with their friends and family in their pods. Narwhals communicate by using a series of clicks and squeals. They also sometimes see the males in their pod “tusking” or crossing tusks as a form of dueling or cleaning teeth. 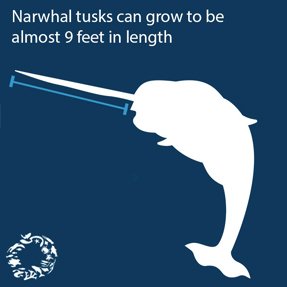 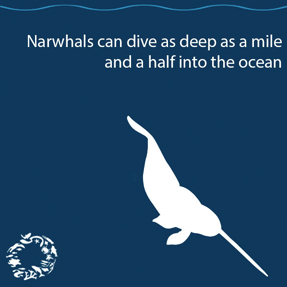