Weighing up to 70 tons, North Atlantic right whales are among the world’s largest animals! They are baleen whales like blue whales and humpbacks, meaning they filter their food through a huge plate of flexible material made of keratin (the same material that makes up human hair and fingernails). They are skim feeders, so they move slowly through the ocean with their mouths open to filter plankton through the baleen, their filter-feeding system. You might be able to recognize North Atlantic right whales by the callosities around their heads, which are raised patches of thickened skin that are often covered by crustaceans known as whale lice.

Unfortunately, North Atlantic right whales were very popular targets in the whaling industry. People began hunting them as early as the 10th century. They are slow movers and like to stay close to land, which has makes them easy targets for whalers. They also happen to float after they die, which makes it easier for whalers to spot them and haul them onboard. North Atlantic right whales got their names because they were the “right” type of whale to hunt. Thankfully, right whales have been protected since the 1930s, but there are still fewer than 500 left in the western North Atlantic.

North Atlantic right whales can eat up to 5,500 pounds of food a day!

North Atlantic right whales are fairly friendly and not really scared by boats. Unfortunately, this sometimes gets them in trouble: They’re particularly susceptible to ship collisions and entanglement in fishing gear. Scientists suspect that at least 72 percent of all right whales have been entangled at some point in their lives, and that 10-30 percent of them are entangled every year. Stakeholders in U.S. and Canada are working together to try to minimize human impacts on North Atlantic right whales. 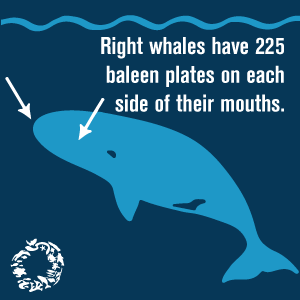 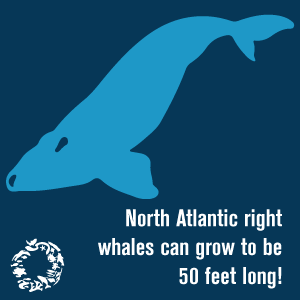