Like their cousins, the Kemp’s ridley, Olive ridley sea turtles are relatively small sea turtles. They can grow up to 2.5 feet and weigh about 100 pounds. In comparison, the leatherback turtle, the largest sea turtle, can grow to more than seven feet and weigh 1,500 pounds.

Olive ridleys are small in size, but great in numbers—they’re considered the most abundant of all the sea turtles. There are an estimated 800,000 nesting females in the wild. However, these numbers pale in comparison to their historic abundance, which reached more than ten million in the Pacific Ocean alone. Olive ridley sea turtles were harvested for their meat, eggs and skin, leading to large decreases in their population.

Olive ridley sea turtles have unusual nesting habits. For other sea turtle species, mothers file on to nesting beaches one by one over the course of nesting season, which can last months. Olive ridley sea turtles, like their Kemp’s ridley cousins, prefer to nest in groups. When it comes time to nest, they will gather off the beaches in groups, then come onshore all at once. They can number in the thousands. This event is known as an arribada, which means “arrival” in Spanish. 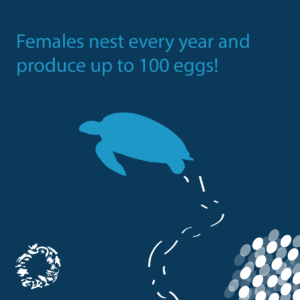 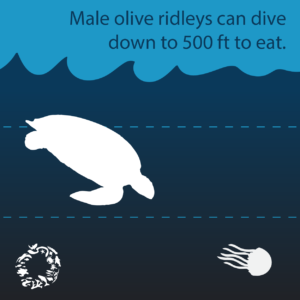