Although some people refer to them as a killer whale—orca sounds much friendlier! Orcas are very easy to spot in the ocean—their iconic black and white coloring gives them away.

Orcas are incredibly powerful hunters and eat fish, seals, sharks and more. People began calling orcas “killer whales” when ancient Spanish sailors observed pods of orcas attacking larger whale species. But not all orcas feed on other whales; their species is very diverse! Orcas have localized populations called ecotypes that differ in appearance, diet and behavior. There are ten different ecotypes spread throughout the world’s ocean.

Did you know that orcas are the largest member of the dolphin family? Take that, bottlenose!

When hunting, orcas gather in groups of around 40 to hunt together. Orcas use a collaborative hunting technique, similar to a wolf pack. The ”orca pack” technique involves beaching (or jumping briefly on land) to scare seals and penguins into the water. Then, once the prey splashes into the water, the orca pod is ready and waiting to feed.

Did you know that orca pods are led by females—orcas are a matriarchal society. 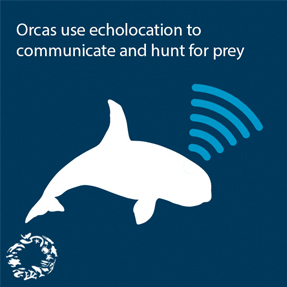 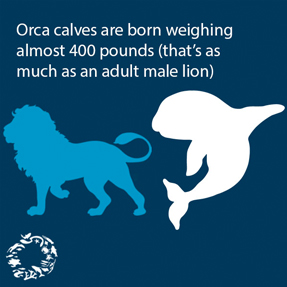