Polar bears live exclusively in the very cold and icy climate of the Arctic where winter temperatures regularly plunge to below -30°F. It’s good to know, however, that polar bears have a protective outer fur coats paired with undercoats and dense layers of fat that help them stay warm. Although their fur appears white, it’s actually transparent. The hollow hair shafts reflect light much like ice does, making polar bears appear white or yellow. Beneath their thick coats, polar bears have black skin that better absorbs the sun’s warmth.

Polar bears spend much of their lives hunting for food. Almost half of their time is spent looking for things to eat, and sometimes they have to travel very far to find it. Only two percent of their hunts are actually successful, so they have to be persistent! There was one polar bear who went on a nonstop nine-day, 426-mile swim to find some food. That’s about the same as swimming from Washington, D.C. to Detroit!

Bears are considered by biologists to be among the smartest animals in North America, especially because they can perform complex tasks. Polar bears are very smart and patient hunters, and sometimes they have to wait for hours above a seal’s breathing hole in the ice, waiting for the seal so they can eat it.

Polar bears are not just crafty hunters; they are also quite playful and will wrestle with fellow bear “friends” and slide repeatedly downhill on ice for fun. This is not all fun and games though; —play is an important part of cubs’ development and helps them practice skills they will later use to hunt and protect themselves. 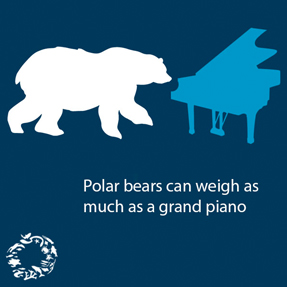 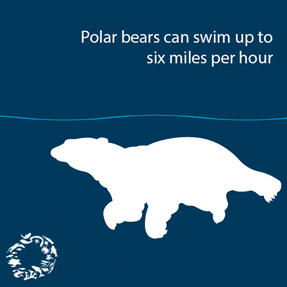