Puffins have some of the flashiest beaks out there! Check out its bright color. Believe it or not, it’s only that vibrant in the warmer summer months—that’s because puffins are trying to show off for breeding season. The brighter and larger the beak, the better the puffin will look to all the potential mates. After a puffin finds the perfect match, its beak will fade to a duller color for the winter months.

Puffins are committed to their families. Many puffins keep the same mate year after year and dedicate a lot of time to making sure their families are happy and healthy! Puffins lay only one egg per year, and both moms and dads take responsibility for raising the babies.

Their nicknames include “sea parrot” and “clown of the sea.” The latter comes from the puffin’s brightly colored beak.

Puffins can flap their wings up to 400 beats per minute, reaching speeds of 55 mph. Puffins are also great swimmers. They can dive 200 feet below the ocean surface and flap their wings like they’re flying underwater. Puffins use their large, orange feet to steer so they can hunt for fish.

Puffins are picky about their homes. Puffin “pairs” have burrows that they return to each year. The burrow is lined with grasses, seaweed and feathers to make it extra cozy. 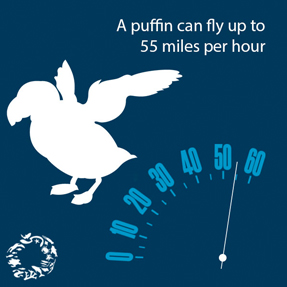 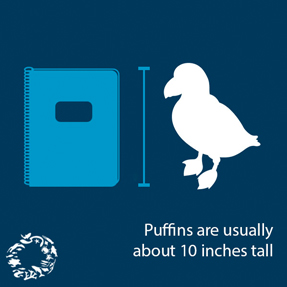