Sea scallops are one of the most valuable fisheries in the United States. They are invertebrates (meaning they don’t have backbones) in the phylum Mollusca, a category that also includes snails, sea slugs, octopuses, mussels and oysters. Within the phylum, sea scallops are part of class Bivalvia, which includes animals with hinged two-part shells made of calcium carbonate. You might have seen bivalve shells washing up on the shore on your last beach trip.

Sea scallops can swim by quickly opening and closing their shells, allowing them to escape from predators. They also open their shells to filter plankton out of the seawater for food—the tiny organisms get caught in the scallop’s mucus, then tiny hairs called cilia move the food towards the mouth.

Female sea scallops can produce hundreds of millions of eggs in one year! They reproduce through a method called spawning, which is where males and females release eggs and sperm into the water column where they combine.

Sea scallops are a popular favorite of seafood lovers. You’ll also see their name pop up in a few cooking terms, including a type of baking dish and a technique of baking a sauce with bread crumbs (scalloped potatoes, anyone?)

Sea scallop populations have varied over the last century due to a mix of habitat degradation and overfishing. Since the 1990s, careful management of this fishery has helped the United States population come back strong. The United States has the largest sea scallop fishery in the world, with more than 60 million pounds of meat worth about $570 million harvested in 2019 alone. Three of the top ports pulling in sea scallops are New Bedford, Massachusetts, Cape May, New Jersey, and Norfolk, Virginia. 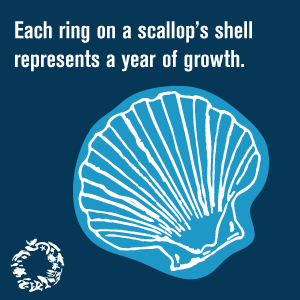 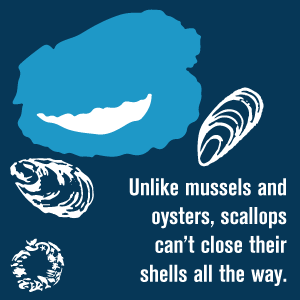