Don’t let their unusual shape fool you—seahorses are actually fish! They’re most closely related to pipefishes and seadragons (maybe you can see the resemblance in their long noses). Unlike most other fish, seahorses swim upright. They are generally pretty small and range from about the size of a thumbnail to more than a foot long. The genus Hippocampus includes 47 species of seahorses, and almost 1/3 of those were discovered within the last decade—there are probably more that haven’t been discovered!

It can be difficult to spot seahorses in the wild. In addition to their generally small size, they are experts in camouflage, and many of them have similar patterns to their habitat, allowing them to seamlessly blend into coral or seagrass. This helps them both hide from predators and sneak up on prey. Unfortunately, seahorses can’t always hide, and one of the largest threats to their population is illegal capture by humans for use in traditional medicines and home aquariums.

Seahorses have prehensile tails, also known as tails that can grab objects. Although similar to monkey tails, they’ve evolved independently— seahorses scientific family are the only type of fishes who have them! This allows them to hold onto seagrass and other objects, especially when they “roost” at night. Attaching to floating seaweed, seagrass or unfortunately even marine debris means they can travel much further distances than they could normally swim on their own.

Seahorses have a unique breeding ritual. Couples will greet each other every day with an intricate dance that involves mirroring each other’s movements, swimming side-by-side and more. This is a way to check in with their partner and make sure they’re okay and ready to mate. When it comes time to breed, females place eggs in a small pouch on the male’s body. That’s right—the male seahorse takes the lead when it comes to the labor of childbirth. There are multiple breeding events throughout the season. 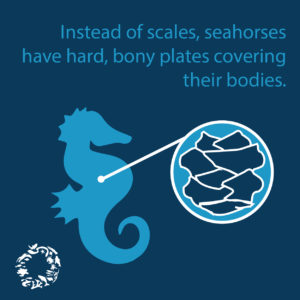 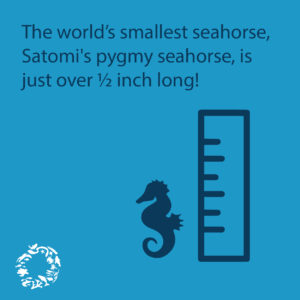 Learn more about our ocean