Surf scoters are among the flashiest sea ducks around! Their jet-black color, white patches on their heads and multi-colored beaks certainly make them stand out. Females are a little more subtle with their coloring—their brown heads and bodies help them blend into the wooded areas where they like to lay their eggs. You can find surf scoters in North America near bodies of water. They have to be close to the coast so they can easily find the mollusks, crustaceans, grasses and small fish that they like to eat. To get their meals, surf scoters dive through wave crests and down beneath the ocean surface, typically not below a depth of 30 feet.

Surf scoters’ unique coloring led to their nickname of the “skunk-head coot.”

Surf scoters move around a great deal depending on the time of the year. In the winter, they stay by the ocean and in shallow bays where they focus on finding a mate. To get a female’s attention, the male will swim back and forth while stretching his neck and bowing. Many males may surround a female at once, so sometimes the male surf scoters will fight each other to impress the females. In the summer, surf scoters move north to the Arctic region where they breed. Females will lay their eggs in nests away from the water and well-hidden from predators. 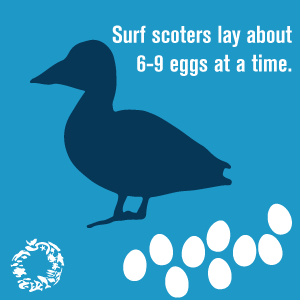 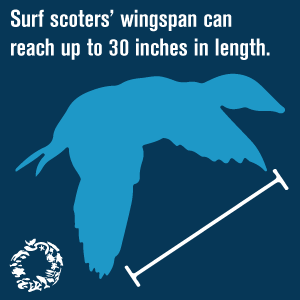