There’s a reason tiger sharks have that name—they’re as fierce predators in the sea as their orange-and-black namesakes on land! Plus, as juveniles, tiger sharks have dark, vertical stripes which are harder to spot as they get older. Tiger sharks are bluish grey to dark grey on top and have white bellies which helps them blend into the surrounding waters from above and below. Tiger sharks can blend in only so much, though—their average length is around 14 feet, but they can be longer than 20 feet.

Tiger sharks are known for being aggressive, and it’s true that they are second only to great whites in numbers of shark attacks on humans. But the fact is that people are MUCH bigger threats to tiger sharks than tiger sharks are to people. Heavy harvesting for fins, skin and livers has left tiger sharks classified as “near threatened.” To top it off, tiger sharks have slow reproduction rates, so they have a hard time bouncing back to healthy populations.

Tiger sharks really do eat almost anything. They have been found with license plates, tires and even other sharks in their stomachs.

Tiger sharks are excellent hunters. They’re not picky when it comes to food—their powerful jaws and sharp teeth allow them to consume a wide variety of prey, including stingrays, seals, turtles, clams and more. That means that unlike other sharks that are more particular about their prey, tiger sharks have practically an endless food supply.  Tiger sharks are naturally very curious, which helps in discovering new food sources, but their curiosity is unfortunately responsible for some of the attacks against humans (although these attacks are actually very rare). Tiger sharks prefer their ocean prey to humans any day!) 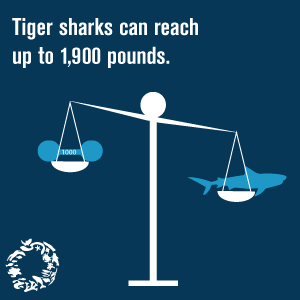