Whale sharks live in tropical climates and warm waters. They spend most of their time away from the shore in deeper waters around 150 feet below the surface (that’s equivalent to the width of an American football field). On the rare occasion that whale sharks do come near the surface, they are really hard to miss! Whale sharks are the largest fish in the world and can grow up to 40 feet long and weigh up to 20,000 pounds. That is the height of two giraffes stacked on top of each other and the weight of two elephants combined. Their mouths are three feet wide and hold more than 350 rows of teeth. Don’t be alarmed if you ever come into contact with a whale shark—they won’t hurt you! Whale sharks are gentle giants. Sometimes, they even get help from remoras and pilot fish that help them stay clean by removing parasites and bacteria from their large bodies. Parasites use whale sharks as a food source and usually aren’t harmful but can sometimes become a nuisance. Be careful to steer clear of the whale shark’s tail—it is extremely powerful and can really harm a person.

Each whale shark has a spotted pattern that is unlike any other whale sharks. These unique markings are just like human fingerprints. The spots can be white, yellow and gray and are displayed in a checkerboard pattern.

Another cool thing about whale sharks is that they have a sixth sense. The scientific name for this sense is the Ampullae of Lorenzini which means that whale sharks can sense electromagnetic fields emitted by other animals.

Are they whales? Are they sharks? Let’s clear it up! Whale sharks are sharks, meaning they are fish (not mammals). They are closely related to the bottom-dwelling shark, the wobbegong. Try saying that name five times fast!

Whale sharks generally enjoy roaming the ocean alone. However, if there is an area with an abundant plankton, their favorite food, a group of whale sharks will gather together and filter feed. To filter feed, they swim through the water with their mouths open and suck out nutrients and plankton that are suspended in the water. In addition to plankton, whale sharks love eating squid, krill and small fish.

Learn more about our ocean 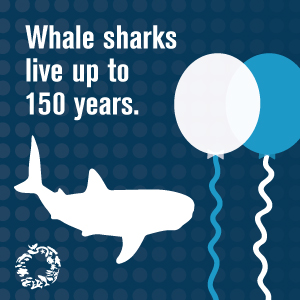