White marlins are among the flashier predators in the sea. Their distinctive upper jaws, known bills, are long and sharp, and white marlins use them to injure or kill their prey.

White marlins are typically found fairly deep in offshore waters, but during daylight hours they swim closer to the water’s surface looking for snacks of baitfish. White marlins especially like areas where there is a mixing of temperatures, currents or salinities—these areas tend to be very nutrient-rich and therefore are attractive to the white marlins’ prey.

White marlins are part of a group called “billfish,” a term which refers to predatory fish in the family Istiophoridae. As their name implies, they all have bills that they use to attack prey. But that’s not the only thing they have in common; white marlins are all very migratory and are often found in tropical or sub-tropical waters. Other members of the billfish squad include black marlin, blue marlin, sailfish, swordfish and spearfish (just to name a few).

White marlins are known to be show-offs, especially when it comes to fishermen. You can typically spot white marlins cruising around with their fins just visible over the water, a behavior known as “tailing.” They also don’t like to go down without a fight and are known to leap into the air and whip their tails around if hooked. If you catch a white marlin, be careful—they can cause some serious damage with their sharp bills. Their flashiness and size (combined with how difficult they are to catch) makes them a favorite of game fishermen, especially in the summertime from Cape Cod, Massachusetts, to Cape Hatteras, North Carolina. 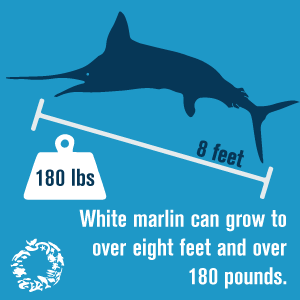 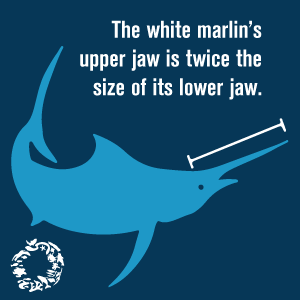