You may have heard coral reefs called “the rainforests of the sea,” but did you know they could also be called the “speed bumps of the ocean?” Not only do coral reefs host an estimated 25% of ocean species, but they also slow down and shrink waves that approach land. This keeps hundreds of millions of people safe and dry around the world. At the same time, coral reefs also offer these coastal dwellers many opportunities—for nutrition, their livelihoods and income based on coral reef-area fishing or tourism.

Carbon dioxide, primarily stemming from fossil fuel burning, is poised to change all that. It’s causing the ocean to acidify, which slows the growth and reproduction of coral reefs, and it’s indirectly causing the ocean and atmosphere to heat up. Together, ocean acidification and warming are helping break down the physical structure of coral reefs, taking away their ability to serve as speed bumps that protect coastal communities from tropical storms and tsunamis.

In a new study, my colleagues and I compiled data on human dependence on coral reefs, warming and acidification to see where we are at greatest risk from carbon dioxide-caused changes. Where ocean acidification and warming will worsen most quickly, reefs are expected to suffer most from this one-two punch. That means people in the Coral Triangle countries of Southeast Asia and the Great Barrier Reef region will experience the loss of coral reef benefits most strongly. 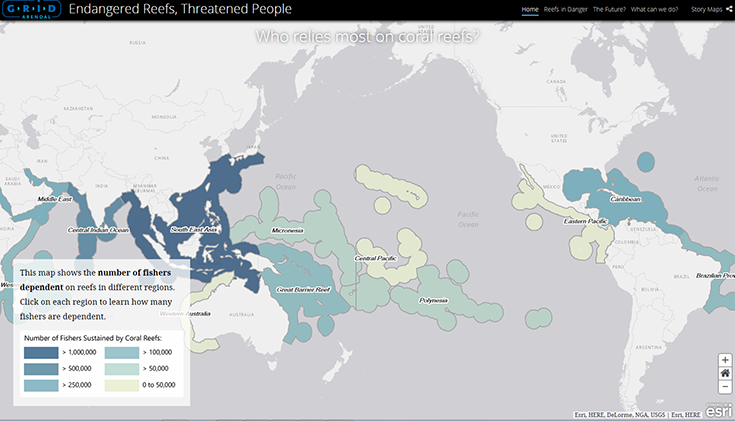 Unfortunately, we don’t have enough research and monitoring in these regions at greatest risk. The South Pacific’s coral reefs border many isolated islands and atolls, so studying conditions across the region is challenging. But investing there is worthwhile—increased research and monitoring in the South Pacific could uncover places where refuges exist for corals from the steady increase of acidification and heat. Naturally occurring safe spaces could provide places for corals to hide, and from there they could send out larvae to “reseed” the oceans when conditions improve in the future.

Many of the coastal communities who face greatest risk from losing coral reefs are not the ones who contribute most to worldwide carbon dioxide emissions. It’s inspiring that the ocean is now being considered in global negotiations about emissions—recall that last year’s Paris Agreement specifically names “the ocean,” a first for a global agreement. Tomorrow, at the 22nd Conference of the Parties (COP22) in Marrakech, where international leaders are meeting to continue international progress on climate, the Ocean and Climate Forum official side event will focus on how we can integrate ocean and climate action into international agreements.

One such small way to encourage action on ocean acidification is the International Alliance to Combat Ocean Acidification. Nations who join the Alliance are pledging to begin or continue efforts to address ocean acidification, including advancing scientific understanding and expanding public awareness, and to share their knowledge with other members of the Alliance as the international community searches for solutions. Speed on this front will be good news for the “speed bumps of the sea.”