I recently received a card from the canoeing camp I attended and worked at in my youth. The photo on the front showed two young men in a canoe, smiling broadly next to a large floe of sea ice, its smooth melting surfaces in many shades of pastel blue rising above them.

I could well imagine their delight on reaching Hudson Bay at the end of their trip, to find this reminder of how far they had come, how different their destination from what they knew back home.

We didn’t paddle next to ice floes on my own trip to Hudson Bay many years ago, but even a glimpse of a bright white line on the horizon as we took off for the flight south was a thrill.

Little did I know then that Arctic sea ice would become a part of my life.

After college, I counted whales from the ice edge on the north coast of Alaska. The ice was a surface to travel and camp on. The movement of the floes created high ridges of jumbled ice that served well as vantage points from which we could spot the migrating whales. A friend and I used one particularly high cliff to practice our ice climbing skills. And, of course, the ice was home to polar bears, which occasionally wandered into sight and even into our camp. I was a long way from my childhood home in suburban Massachusetts. 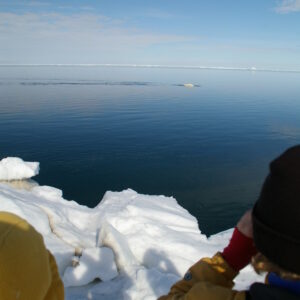 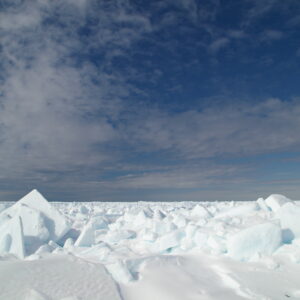 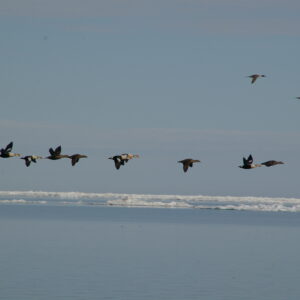 Since then, I have spent more time on and amid ice, and much more time learning about the role ice plays in Arctic waters and in our global climate.

The ice is not just a platform for those of us traveling over its upper surface.

Algae grows from the bottom of sea ice, starting the massive bloom of life each Arctic spring, fueling an entire food web, from plankton and fish to seabirds and marine mammals. So much is produced in some areas that there are not enough animals to eat all of it. Most falls to the seafloor, creating an immensely rich environment that feeds year-round residents such as walruses, and also draws gray whales from their wintering grounds thousands of miles away in Baja, California.

That distant white line I saw on the flight home from Hudson Bay was so dazzling because sea ice reflects up to 90% of the sunlight that reaches it. Doing so helps regulate the earth’s climate, reflecting light back into space, in contrast to open water which absorbs sunlight and warms up. As Arctic summer sea ice shrinks, the ocean absorbs more heat, leading to more loss of ice, creating a reinforcing cycle of cause and effect. The result to global climate is the equivalent of adding millions of tons of carbon dioxide to the atmosphere. In other words, the more we lose sea ice, the harder it is to recover.

Sea ice is vital to Arctic ecosystems and to global climate.

Even those who will never see Arctic sea ice, or even hear about it, are affected. Sea ice patterns affect weather throughout the northern hemisphere. When sea ice is absent off northern Alaska, the eastern seaboard of the United States can get major snowstorms. This unexpected result is nonetheless a sign of global warming and the disruption of the stable climate that has existed for all of recorded human history. What happens without sea ice is something we simply do not know.

Let us not, however, regard sea ice as other-worldly. Sea ice is our-worldly—an all-too-visible symbol of how we are treating our home.