Walruses are easily recognized by their large, prominent tusks. Tusks are found on both males and females and are used to move on the ice, defend against predators like polar bears and orcas and to fight off other males. Walruses can be quite territorial during the winter breeding season!

Using their tusks to navigate around the ice is an important tool for walruses’ survival. Tusks allow walruses to heave their large, blubbery bodies onto the ice and poke holes in the ice to breathe when they’re underwater. Although walruses spend two-thirds of their lives in water, they use packed ice to rest and give birth.

Walruses have a few other adaptations that make them well-suited to the icy Arctic. They have thick layers of blubber that keep them insulated in the frigid waters. They also have 400-700 highly sensitive whiskers on their face, called vibrissae, that they use to feel along the seafloor for buried food.

According to the International Union for Conservation of Nature (IUCN) Red List, walruses are considered “Vulnerable,” meaning they face a high risk of extinction in the wild. There are an estimated 112,500 individuals worldwide, but their population trends (whether populations are increasing or decreasing) are currently unknown. Historically, they were at risk from hunting but now their biggest threats are disruption from drilling, increased shipping and climate change. 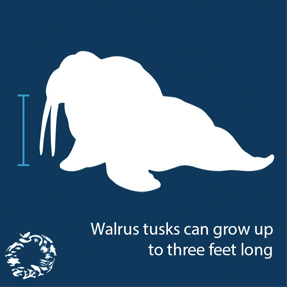 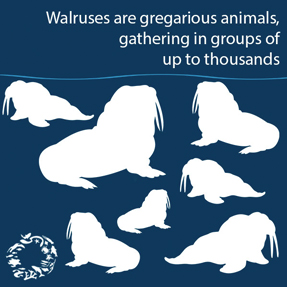