Why Sports are a Critical Ally for Conservation

When the Kansas City Chiefs and the Tampa Bay Buccaneers take the field this Sunday for Super Bowl LV, Ocean Conservancy will be rooting for both sides. Why? Because our ocean needs every team—and every player—doing their part for a healthy and livable planet. No matter who wins on Sunday, we all win. Ocean Conservancy has seen first-hand what athletes, their teams and the sports world at large can do to help create change, both on and off the field. And now more than ever, the ocean and all our coastal communities need more of it.

Climate change is affecting all of us. The effects of society’s continued reliance on fossil fuels are fundamentally changing the planet, including the ocean. This matters because the ocean matters to us all. Covering two-thirds of the planet’s surface, the ocean is literally the life support system for the planet. A healthy ocean feeds us, produces oxygen needed for life and controls the weather from the tropics all the way to the poles. A healthy ocean is vital for all of us, whether we live on the coast in Tampa, Florida, or far from the ocean’s shore in Kansas City. It doesn’t matter whether you are a fan of Buccaneers Quarterback Tom Brady or Chiefs Quarterback Patrick Mahomes.

That’s why Ocean Conservancy is working hard to bring more people into the conversation about the importance of a healthy ocean. Last Super Bowl, we were in Miami as the ocean partner for Super Bowl LIV, where we first worked to bring the ocean to sports fans and local residents alike. We partnered with the City of Miami, the Miami Super Bowl Host Committee, NFL Green, the Miami Dolphins, Pepsi, Centerplate and others on a variety of environmental initiatives all centered on ocean health. Alongside Ocean Conservancy, these partners removed or diverted 54 tons of plastics and other debris from Florida’s coastline, reduced single-use plastics at the Hard Rock Stadium, entertained and educated nearly 100,000 fans at the Ocean Conservancy booth in the Environmental Village and reached more than 1 billion readers through media generated over the course of the year-long Super Bowl partnership. 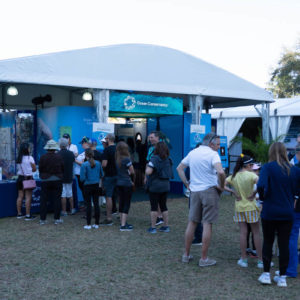 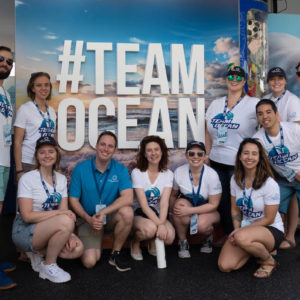 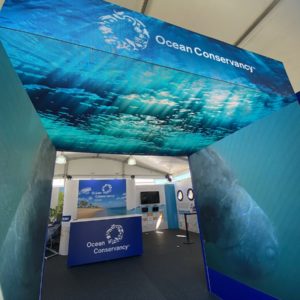 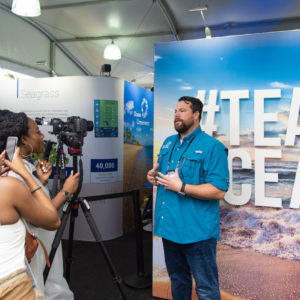 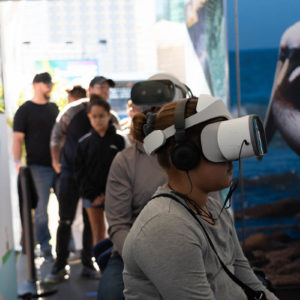 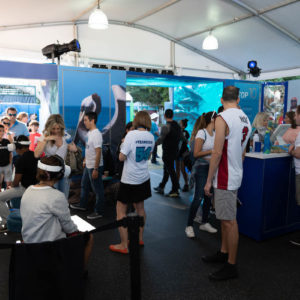 And last year’s big game was also where we launched #TeamOcean, a group of ocean enthusiasts that has only expanded over the last year. Arizona Cardinals running back Kenyan Drake shared his motivation for environmental causes with participants at our first Super Bowl week beach cleanup. Team Ocean has grown to become a group of professional athletes, teams, leagues, personalities and others that use their platforms to push for a healthy ocean and action on climate change. Ten NFL players, including D’Ernest Johnson of the Cleveland Browns and Khalid Kareem of the Cincinnati Bengals, joined TeamOcean through their affiliation with NFL’s My Cause My Cleats. Baseball is now joining the team, with Hunter Pence (formerly of the San Francisco Giants) highlighting his commitment to climate action by riding his scooter instead of driving to the ballpark on game day.

Ocean Conservancy is working to build a broader platform with sports teams that will benefit the ocean and our climate. We developed a “Blue Playbook” to guide sports teams on how they can make changes within their facilities and in their local communities to reduce carbon emissions, address single-use plastics, moderate freshwater run-off from the playing surface and advance racial justice and equity. We brought this message to the virtual 2020 Sport Positive Summit, where teams from the English Premier League to the Wimbledon Tennis Championships are working together to drive climate action and other sustainability initiatives throughout their organizations. Across all levels, from the athletes to the front office, sustainability is becoming part of sporting operations; the ocean has an important role to play in meeting these sustainability goals.

Ocean and climate leadership aren’t just the sole responsibility of the clubs themselves; many of their corporate partners that bring the games and concessions to the fans are playing a leading role too. Nike, one of the world’s largest sports brands, has joined Ocean Conservancy’s Arctic Corporate Shipping Pledge to help address emissions from the shipping sector. Sodexo was a critical partner in helping Hard Rock Stadium reduce its reliance on single-use plastics, and is putting resources to work across all of its sports and entertainment properties.

Ocean Conservancy is hoping for an action-packed, exciting Super Bowl this Sunday in Tampa. While the pandemic is forcing a radical change in how the game will be viewed, the virus can’t upend one fundamental truth: sports are part of our cultural DNA. But sports are bigger than just the “big game.” They have an unprecedented opportunity to play a major role in addressing climate change. Sports can bring new voices, new perspectives new communities, and new actions into the most pressing issue of our time—how to unite around humanity’s shared interest in a stable climate and a healthy ocean.

We welcome more players to #TeamOcean!