Upon first glance, brittle stars may look like starfish but don’t be fooled! Although brittle stars and starfish are closely related, they are completely different species.

Each brittle star has a distinct central disk and five skinny, flexible arms. The central disk is made up of a skeleton of calcium carbonate and contains all the internal organs. Brittle stars’ arms twist and coil to help them move across the seafloor. But that’s not the only thing their arms help with: Brittle stars can release one or more arms to escape predators. As long as a brittle star holds onto its central disk, they can still function and their limbs will regenerate.

Brittle star mouths contain not one … not two … but FIVE jaws!

Brittle stars live in a variety of habitats around the world. There are 73 species in the Arctic alone! There, they live at various depths, with some species occurring deeper than 3,500 meters. In the Alaskan Arctic, you can find most species on shallower ocean shelf waters.

Brittle stars play a pretty important role in the food web. They are known as “seafloor ecosystem engineers,” meaning they reshape the sediment shape on the seafloor, which in turn influences the distribution of other seafloor species. Brittle stars use their mouths (found on the underbelly of their disks) to munch on small organisms and detritus. They can also filter feed organisms from the ocean water. On the flip side, they are prey for fish, sea stars and crabs. 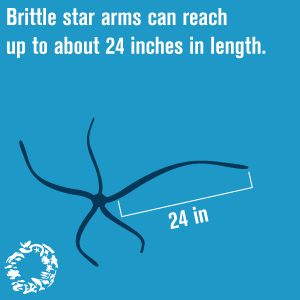 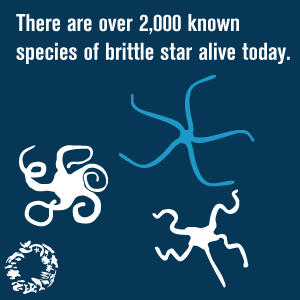